"Yelz Ke!" The Return of Jenifa premieres in Nigeria on the 7th of October 2011 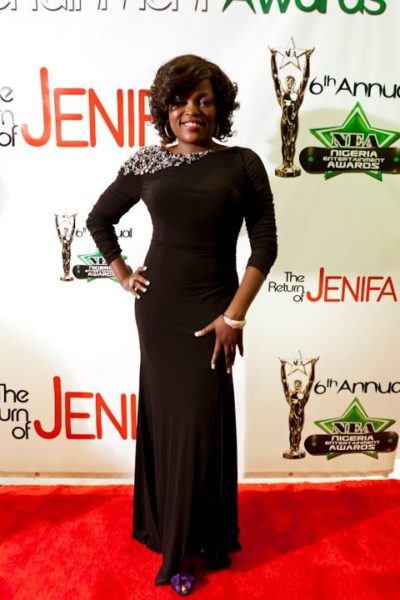 After a successful premiere during the 2011 Nigeria Entertainment Awards weekend in New York, one of the most eagerly anticipated movies of the year is finally making its Nigerian debut.

On the 7th of October 2011, Funke Akindele‘s “The Return of Jenifa” will premiere in Lagos! The movie features cameos from various high profile celebrities including eLDee, Banky W, Sasha, Denrele, Antar Laniyan, Iyabo Ojo, Ireti Osayemi, Helen Paul, the late comedian CD John, Omawumi, Yinka Quadri and many more so we know the premiere will be star-studded as well!

At the NYC premiere, Funke looked stunning in a floor-length black dress accessorized with $100,000 worth of diamonds! The star was styled by Lilian Unachukwu’s Liam Fashion Agency (LFA), we look forward to seeing what Funke “rocks” this time.

The movie, which was directed by DJ Tee of DJ Tee Films, was produced by Funke Akindele. When asked to comment on the success of the movie, producer Funke Akindele said, “the response we got from people about the first part of the film was very encouraging, and a lot of people were highly expectant about the second part, and in order not to disappoint them, a lot of effort was put into the making of ‘The Return of Jenifa’ and I’m sure that the Nigerian audience will not be disappointed”.

The storyline of the movie ‘The Return of Jenifa’ revolves around the life of the main character Jenifa. Here she registers to be part of a dancing competition, but when she is asked to undergo an HIV test as part of the requirements for entry into the competition, she flees being unsure of her status, as a result of her past exploits. She is later forced to withdraw from the society that she once ruled, and relocates to the village. Going back to the village however does not stop her from being her crazy self, and in the end she learns that life is not all about being a ‘Gbogbo Bigs Girls’.