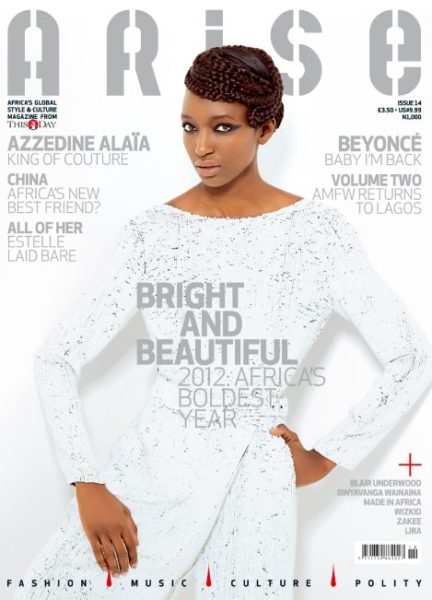 We are still catching our breath from the 2011 ARISE Magazine Fashion Week which took place in Lagos. Now, ARISE has unveiled plans for this year’s edition of the major fashion event.
Check out the press release below and see the brand new cover of Issue 14 of ARISE Magazine. Ugandan model Daphine Tony is the cover girl for the “Bright & Beautiful” issue.

Due to the phenomenal success of the inaugural ARISE Magazine Fashion Week 2011, where 5,000 guests, 51 designers, 81 models, 5 musical acts performed over three days – ARISE is once again proud to announce that it will return to Lagos in March 2012.

The ARISE Magazine Fashion Week 2012 fashion extravaganza will run for an extended period of SIX days from Tuesday 6th to Sunday 11th March 2012.

At last year’s AMFW 2011 fashion event SEVEN designers:
Lanre Da Silva-Ajayi, Jewel by Lisa, Asibelua, Bunmi Koko, Tsemaye Binitie, Pierre-Antoine Vettorello and KlûK CGDT were given a golden ticket invitation to showcase their designs in September 2011, as part of the Made in Africa by ARISE Magazine Collective at the Avery Fisher Hall, New York.

ARISE Magazine founder Nduka Obaigbena says: “There is a side of Lagos that chimes well with the international fashion scene. We at ARISE Magazine recognise that the city has much to offer in the way of vibrancy and extraordinary talent in abundance making it the cultural capital of Africa. Once more we are proud to be associated with nurturing new designers from the vast continent – and continuing our support of those who are more well-known in Nigeria and in the diaspora.”

BN Exclusive: Superstar Comedian Basketmouth – the Musician? Listen to his first single as ODDZ “Where You Dey” feat. Wizkid & eLDee