The two housemates were bickering all day and despite Big Brother intervening and advising them directly that they needed to amend their behavior immediately, in line with the clearly stated house rules forbidding violence and provocation, the housemates chose to disregard the instruction and their bickering continued and escalated into violence. 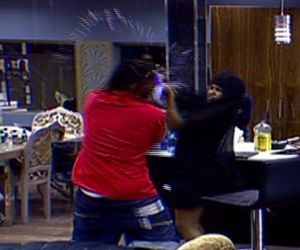 A Snapshot of Roki & Maneta's Fight

This was exactly the same rule that Sierra Leone housemate Zainab and Ghanaian housemate DKB broke that unfortunately got them disqualified from the show after an argument between the two upville housemates turned violent. According to the rules of the show, any housemate committing any act of physical violence is subject to immediate expulsion from the series. This season saw the “anti-violence” rule expanded to include any housemate whose provocative behavior contributed substantially to creating a hostile and aggressive environment in which violence is the result.

Just like DKB and Zainab, Roki and Maneta will be provided with psychological and medical treatment and counseling to assist them with conflict and anger management.

Watch the video of Roki treating his left eye!

Are you in support of this 2nd disqualification by Big Brother? Do let us know!