BN Hot Topic: To Fight or Not To Fight 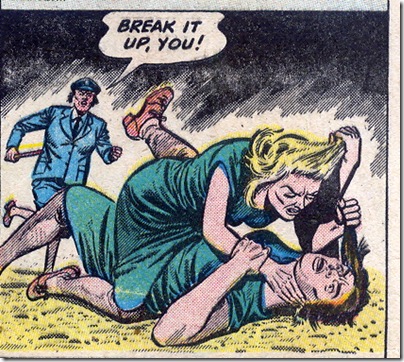 When the movie The Avengers opened at the cinemas in Lagos, I was very anxious to see it so I bugged three of my closest friends and off we went to Silverbird. (No I wasn’t going to pay 2,500 to see the movie in 3D. It wasn’t that serious!)

Anyway, as it was early days of the release, the cinema was PACKED. We managed to find four seats next to each other somewhere in the front and the movie started. About 20minutes later, there was disturbance a few seats in front of us and as the noise grew louder I got the gist of what had happened. (Please note that the good people at Silverbird did not pause the main flick for us to watch the slowly unfolding side drama)

Babe A had come to the cinema, was probably expecting her friend and proceeded to put her bag on the chair beside her. Babe B, comes in some time during the movie, looks around, finds no seat but this one with the bag on it and moves the bag and she plops right into the chair. Long day at work I imagine.

From what I could glean, this is how the conversation went.

Babe A : “Someone is coming to sit down there, you can’t have that seat”.

Babe B: “How can you keep a seat at the cinema? There’s no other place for me to sit”

Babe A: “I don’t know but you saw my bag there did you not?”

Next thing I knew Babe A jumped up and started shouting.You lack home training and you’ll come outside and show that lack of home training. You will learn today.  She cussed and issued threats and it was such a distraction from my complete enjoyment of the yumminess of Robert Downey Junior. Babe A stalked out of the cinema and we thought that was the end of that till she came back with the Silverbird security officials (I had to laugh at that point because I honestly expected more… I don’t know.. Mobile Police men, Lastma officials, even Man-O-War guys from NYSC camp sef with all the threats that were issued.)

Anyway, long story short, Babe B sha jejely enjoyed the movie to the end while Babe A took the bag in issue and left.  After the thrill of the movie wore off… (wait no.. the thrill of THAT movie isn’t wearing off anytime soon but I digress again). I thought about the two women and the issue that had come up and it made me think of what I’d do if I was in that situation. If I was Babe A, would I have kept a seat for my friend? I probably would. (Yes, I know this isn’t Faculty Lecture Theatre but old habits die hard!) Would I have made a big song and dance about the space taken? I don’t think so. Does this make me a push over? Well I don’t know. How do you know when to be the bigger person and walk away from a potentially unproductive and embarrassing position? Sometimes, we feel like we’re being taken taken for granted and we just have to prove we’re not fools.

It happens EVERY WHERE. Queues  at the ATM, someone is feeling smart and pretends like he can’t see you’ve been standing there; in traffic, someone thinks you just feel like chilling on the road and decides to cut you off; you’re at TFC trying to place an order and the chic behind you stretches her hand over your head for whatever reason… How do you know when to walk away? How do you know when to respond when someone is trying to have one over you?

What would you do if you were in that situation? How do you know when to be the bigger person on this moral high ground called life?

I leave you with a snippet one of my favorite songs of all time.

The Gambler by Kenny Rogers

Let’s discuss. What do you guys think?

On Becoming a Man: The Fundraiser’s Diary – Part II