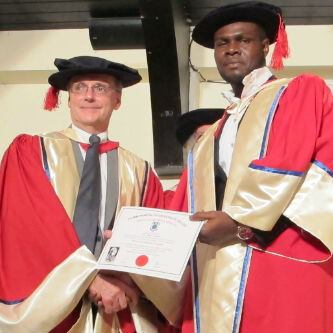 It is surely a happy day in the house of Linus.

Stephanie who wed Linus on Saturday 21st April 2012 in a beautiful grand ceremony in Paris, France, took to social networking site Facebook to share her joy. She said “Congratulations to my hubby on his conferred combined Doctorate Degree by the Common Wealth University Belize and the London Graduate School Convocation in Dubai – Hello Dr. Linus Idahosa!”.

A huge congratulations to Dr. Linus Idahosa and Stephanie, who was also given a honorary award on Friday 6th July 2012 at the University of Calabar, which she graduated from in 2004, with a degree in English and Literary Studies.