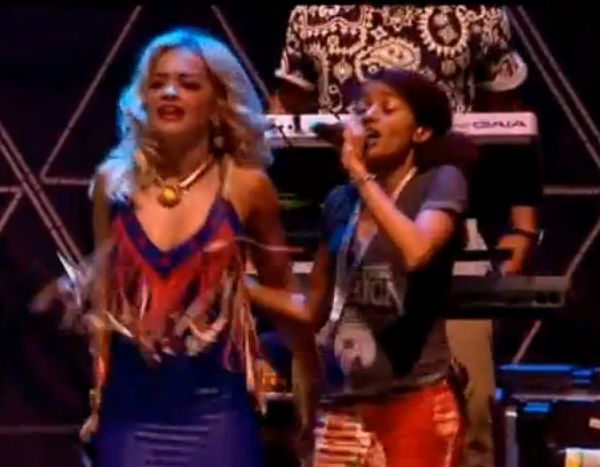 The singer responsible for such smash hits as “Party” and “R.I.P.” who has been tagged by many a music critic as “the next Rihanna”, Rita Ora pulled up Nigerian Songbird, Nneka onto the stage during her performance at V Festival 2012 of her hit single, “R.I.P.”

Many music heads know that a sample from Nneka‘s popular “Heartbeat” song was used in Rita Ora‘s hugely successful, “R.I.P” and it was a huge surprise to fans when Nneka came on stage to perform with her.

The V Festival is one of the biggest concerts that hits England every year during the penultimate weekend in August and features a myriad of superstars from different music genres and countries so I can imagine how many Rita Ora fans are now bumping to Nneka‘s music.

The recently concluded V Festival featured the likes of Nicki Minaj, LMFAO, Emeli Sande, Tinie Tempah, David Guetta and Cher Lloyd just to name a few as the event is held at two parks simultaneously which share the same bill on up to four different stages. Here’s a clip of the performance. Check on it.

Another Reason to Buy Samsung Products! Leading Electronics Manufacturer Introduces 24-Month Warranty on All its Products