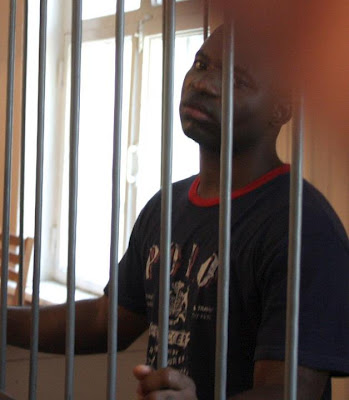 Nigerians living in Ukraine, and indeed, across the world are protesting the arrest of a Nigerian student for allegedly defending himself against six teenagers who attacked him at the entrance to his apartment block. The student, Olaolu Sunkanmi Femi is currently languishing in jail and may be facing life imprisonment in Ukraine.

African Outlook gathered that he was arrested after defending himself against his assailants with a glass from a broken bottle in front of his apartment block on November 5, last year in Luhanski, Ukraine.

Witnesses at the scene told African Outlook that one of his friends was physically attacked in front of his apartment by four Ukrainian young men and two women who pulled them to the ground while hurling racist slurs on them.

Sunkanmi was said to have managed to get up and defended himself against the assailants with a glass from a broken bottle.

“It was while he was defending himself that police arrived at the scene and the Nigerian was subsequently arrested and charged with attempted murder of five people” a Nigerian embassy staff who has knowledge of the case told African Outlook, adding that the victim thus became an accused in a case which has become a celebrated case in Ukraine.

What is noteworthy about his case is that Olasunkanmi has since been remanded in detention by the Ukrainian police who refused to take the case to court citing unavailability of the police to get an interpreter for him.

Osarumen David-Izevbokun, a Phd student in International Relations and the leader of the Nigerian Students’ Community in Ukraine alongside other Nigerian students have been organizing protests as well as drawing the attentions of the human right groups in Ukraine to the plight of Olasunkanmi who has spent almost seven months in jail without trial.

According to a source, the female Lawyer handling Olasukanmi’s case, Ludmila Havrysh was reported to have told protesters that her client has not been able to read the file material since it is all written in Ukrainian or Russian which he doesn’t understand and that was why her client had remained in jail.

“We heard she wanted to be paid $10,000 when she had not even been able to secure bail for her client who has been in detention for more than six months” the source told African Outlook.

When asked if the embassy has been able to secure the service of an attorney for the Nigerian student, a Nigerian Embassy staff who spoke anonymously told African Outlook: “It is not within our mandate to pay for attorney’s fees for any Nigerian in distress, you may check this out with other Nigerian embassies abroad, but we have been working with the Nigerian community leaders here to ensure that we do everything within our means to help Olasunkanmi in time of his need.”

They sustained knife injuries inflicted on them by yet to be identified persons.

To raise support for Olasukanmi, a Facebook Page: Let’s Support Olaolu Femi has been opened.

It is hoped that Olasukanmi’s case would be treated fairly and he would find the necessary help from the Nigerian Embassy soon. 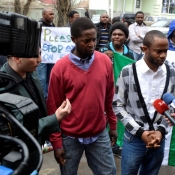 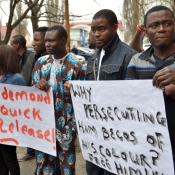 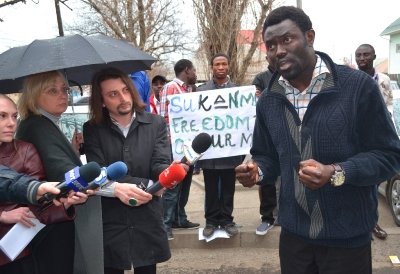