From Orphan to Whiz Kid! Despite Losing Both Parents at a Tender Age, 14 Year-Old Maud Chifamba Defies All Odds to become Zimbabwe's Youngest Ever University Student 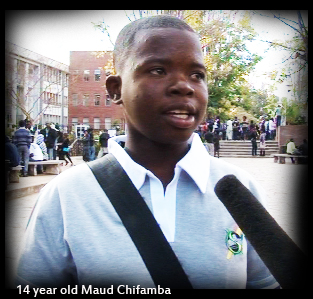 We often hear stories of young children excelling so well in their studies that they garner international recognition for their hard work. At young ages, they surpass their peers in their academic work and attain heights only common amongst people much older than them.

Recently, BN featured a story of two young University students, a 12 year-old British boy and a 15 year-old Nigerian girl who attracted worldwide attention for their exceptional achievement {click here if you missed it}.

But, what is unique about Maud Chifamba‘s story is that unlike them, she didn’t have the luxury of living a “privileged” life with parental guidance.

As CNN reported, Maud was born on November 19, 1997. She lost both parents at a tender age and grew up in “grinding poverty”. However, she has defied all odds and now has her name written in history as the youngest ever university student in Zimbabwe!

She recently earned a four-year scholarship of nearly $10,000 after scoring 12 points at her Advanced Level exams last December. Her astonishing feat earned her a place at the University of Zimbabwe and she has just started her studies toward a Bachelor of Accountancy Honors Degree.

Maud’s teachers noticed her gift at an early age. She impressed her primary school teachers with her remarkable aptitude and they decided to move her up from Grade 3 to Grade 6.

At the age of nine, she took her final primary school examinations, where she obtained top marks for all of her subjects. But because she lacked the financial support to undertake her high school education, Maud studied on her own and completed her Ordinary Level in just two years after skipping two forms.

Maud was born to a poor family in a community called Chegutu, central Zimbabwe. She lost her father when she was just five years old and her mother last year. Her two brothers who are general workers at a farm were unable to pay the fees required to keep her at formal school so Maud started studying vigorously at home all by herself.

“I studied very hard. For the biggest part of the day and even into the night,” she told CNN. She added that the death of her parents made her realize that she would have to take her destiny into her own hands.

“It really motivated me to work harder because there was no one to take care of me except myself in the future. That was … a motivator for me to have something to do with my life,” she added.

Now an undergraduate, Maud told CNN that she is enjoying her studies at the University. “I’m really enjoying it,” she says with striking modesty. “It’s better than what I expected. I’m just enjoying all the lectures.”

We recognize and celebrate the intelligence and determination of this brave African teenager and say we are proud of her.