Wow! It’s the last Friday of the year already. Goodevening and welcome to the Straight From the Headlines slot on BellaNaija where we recap major stories that made headlines across the country this week. We are so glad you could join us here once again.

The week has been very eventful as usual. Just a few hours ago, sad news filtered in that the Kogi state governor, Idris Wada was involved in a fatal auto crash which claimed the life of his ADC.

Here is a recap of some of the events that made headlines across the country this week:

The Kogi state Governor, Idris Wada was on Friday seriously injured in an auto crash. The governor was initially rushed to the Emergency Ward of the Kogi State Specialist Hospital in Lokoja after the accident, which occurred on the bad Lokoja – Ajaokuta expressway, around Salem University. Wada and his convoy were returning from an official assignment and were close to Lokoja, the state capital before the accident occurred. The governor’s Aide-de-Camp (ADC) died instantly at the scene of the accident. 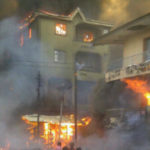 The Police in Lagos have intensified efforts to arrest persons involved in the storage of fire crackers that exploded, burnt houses and killed one person on Wednesday at the Jankara Market. It was gathered that the police at the Area A Command, Lagos Island, have embarked on seizure of firecrackers from hawkers and users within the area. Investigation shows that the importers and some dealers in the firecrackers were on the run after the fire incident. Mr Sadiq Isa, a community leader who described himself as a coordinator at the state governor’s office, said: “Any building found containing firecrackers will be sealed immediately and anyone found with them will be prosecuted.”

There was uproar at Afero village on Lekki-Epe Expressway, Lagos this week as officials of the Lagos State Government demolished a sprawling church, the Pure Fire Miracles Ministries International (PFMI) in a controversial manner. Lagos Task Force men, accompanied by officials from the Ministry for Physical Planning and Urban Development (MPPUD), stormed the church to enforce an eviction ordered by the government. The ministry demolished the building over allegation that there was no approval for the construction of the building.

A former pastor of the Redeemed Christian Church of God (RCCG), Bankole Solomon, earlier this week criticized the General Overseer of the church, Pastor E. A. Adeboye, for allowing politicians like President Goodluck Jonathan, into their annual RCCG Holy Ghost congress and turning it into a political congress. According to a statement released by Bankole who said he left the church as pastor in 2010 but still worships there, the church programme has now turned to a ‘supermarket where charlatans and political opportunists come shopping. However, he released another statement later on apologising to Pastor Adeboye and his wife for his statement.

Nelson Mandela has been discharged after 19 days in hospital during which he was treated for a lung infection and gallstones, the South African government said on Wednesday. The former South African president, who is 94-years-old, was admitted on 8 December to a Pretoria hospital. It was the longest time he had spent in hospital since his release in 1990 from 27 years in prison. Maharaj, who was a political prisoner with Mandela in the 1970s, thanked the South African public and media for their prayers and good wishes and for respecting the elder statesman’s privacy

The Canadian High Commission has reduced the waiting period for visa applicants from 60 days to 10 days. A source at the High Commission told News Agency of Nigeria that the country was now opening up and accommodating more visitors and travellers from across the globe. “Because of this, a lot of Nigerians are sending their children to study in Canada and this has led to a backlog in the number of visa applications. This informed the mission’s decision to reduce the waiting period from 60 days to 10 days,” the source added.

Fun, Fashion & Great Bargains! Photos from the “Fashion & Lifestyle On The Move” Shopping Extravaganza in Asaba