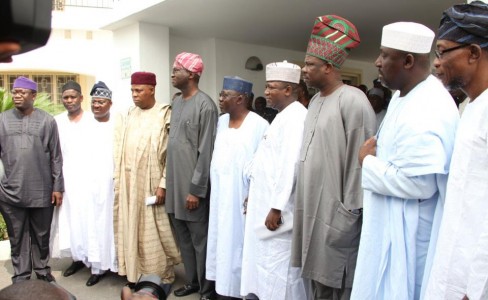 Political aspirants of the People’s Democratic Party (PDP) are in for a tough time in the coming 2015 General Elections as members of four opposition parties have endorsed a merger to present a united front against the PDP.

At the end of the meeting, the Borno State Governor, Kashim Shettima of the ANPP read a communiqué to journalists saying the governors reviewed the situation in the country, and then agreed that dethroning the PDP was critical to rescuing Nigeria from anarchy and underdevelopment.

“As progressive and patriotic leaders of our people across party, religious and geo political zones, we are extremely concerned about the state of the nation and we have put our heads together in the interest of our people to deliberate on what can be done to rescue our country”, the communiqué read. “As Governors, we fully endorse the merger initiatives already commenced by our various political parties and we will put our full weight behind these efforts.”

Imo State Governor, Rochas Okorocha of APGA told Premium Times that  the planned merger had become necessary to save the country from being turned into a one-party state and to make Nigeria a better nation.

On his part, the host governor, Babatunde Fashola of ACN said the meeting was about making Nigeria a better place. “I am convinced here that the full weight of ten of us governors and many more who unfortunately could not make it today is a much more stronger force and the underlying reason is clearly how to make this place a better place,” he was quoted as saying.

The question on everyone’s lips since this news started trending is – Who is going to be the Presidential candidate of the merged parties?

BN Style presents “What To Wear”: Stuck on your Valentine’s Day Outfit? We Have the Answers!