"I know that he was the most special gift given to us..." - Read Ruby Angela Saleh's Emotional Tribute to Her Brother & Gokada Founder Fahim Saleh 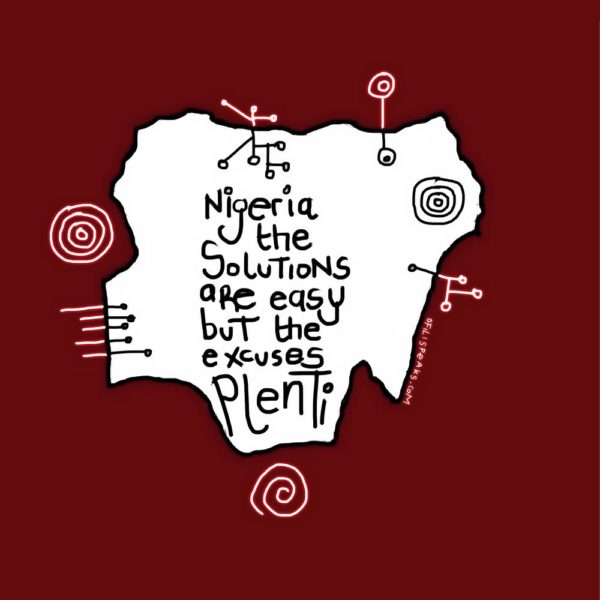 I had just checked in, cleared customs and got my baggage tagged. All that was left for me to do was to dump my luggage on the conveyor belt and then head to my departure gate.

But as I moved to drop my bag on the belt, I was stopped. As a Nigerian in an International Airport, I was  all too familiar with this scenario;  the random check that happens to check me all the time. I guess nothing scares white people more than a 30-something young male Nigerian travelling alone.

But instead of being greeted by a heavy set customs officer with an aggressive barking dog, I was apprehended by a young man at the conveyor belt. He kept  staring at my bag and I in turn couldn’t stop staring at him until I realized that he wasn’t mesmerized by my luggage but rather by the fact that something was spilling out of my luggage, all over the floor.

The source of the leak? My hair spray (don’t judge me!) So, I hurriedly attempted to solve the problem. While rearranging my luggage, I observe the guy from the conveyor belt diligently inspecting each bag before they are placed on the conveyor belt.

Now a conveyor belt inspector job…to me is not the greatest job in the world. Nobody gets up in kindergarten or nursery school and yells “I want to be a conveyor belt inspector!” I mean who can blame them, all you do is watch people drop bags over and over again…but this guy was different. He was clearly focused on his job. In the 3 minutes that I spent fixing up my bag, I watched as he alerted an old lady about possible damage to her medical illegal drug containers if placed on the conveyor belt and then how he informed a middle aged man that his baggage had no tags, meaning that there was no way to route his bags to their final destination #lostluggage.

In the space of 3 minutes and some seconds, the conveyor belt inspector, prevented my luggage and clothes from arriving over-soaked with hair spray, prevented a lady’s drug package from getting damaged and helped ensure that a man’s luggage did not get lost.

In that time, I learned that all jobs are as important as the person doing it. Other people would have just frowned at how sucky being a conveyor belt inspector was and just let any bag go through. But either from an internal drive or proper explanation of the critical importance of his job, the conveyor belt guy as I would like to call him carried out his job with pride and seriousness.

Sadly, the same cannot be said for our airport workers who for the most part are more interested in finding money in your baggage than finding cocaine or bombs. One can argue that this is a direct result of our poor economic situation, but I beg to differ. It may play a factor, but I believe the main factor is a lack of understanding of the importance of ones job.

I say what I say from a point of experience…I travel more than is healthy enough. I spend more time at the Lagos domestic airport than I spend at home (obvious exaggeration). And from the the moment I enter any of the Murtala Mohammed Airport’s whether domestic or international…the abandonment of worker responsibility begins and the hunt for money dominates.

It starts with the guy weighing your bags, who is not focused on the weight of your bag but rather the weight of your wallet. And then it continues on to the customs officials who act as if they are looking for contraband goods, when all they are looking for are the bands of Dollars and Naira. If you manage to survive their onslaught you will still have to face the guys at the security screening post. These are the ones operating the x-ray machines. Half of the time they are looking at you instead of the screen. You can ship a snake in your carry on luggage and they won’t even notice, unless the snake happens to be your snake skin wallet!

Little wonder that after you go through all the security inspection hoop-la for International flights…you are re-screened again at your gate by the Lufthansa’s and KLM’s of the world! Because awon Oyinbo people, just don’t trust that our security people understand the importance of their jobs, and this to me is the most damning. Not the fact that our security can be breached by snakes and bombs, but the fact that there is a prevailing image that Nigerian workers can’t be trusted! And yet management doesn’t see this as a national crisis.

To be honest I doubt they ever will because management just does not get it. What they don’t get is that people judge a country by their first impression, and unless people are entering our country through spaceships or submarines, chances are that they are entering Nigeria through our airports.

So we have to ensure that we deliver a good first impression…but sadly we don’t and we don’t seem to care about the fact that we don’t. 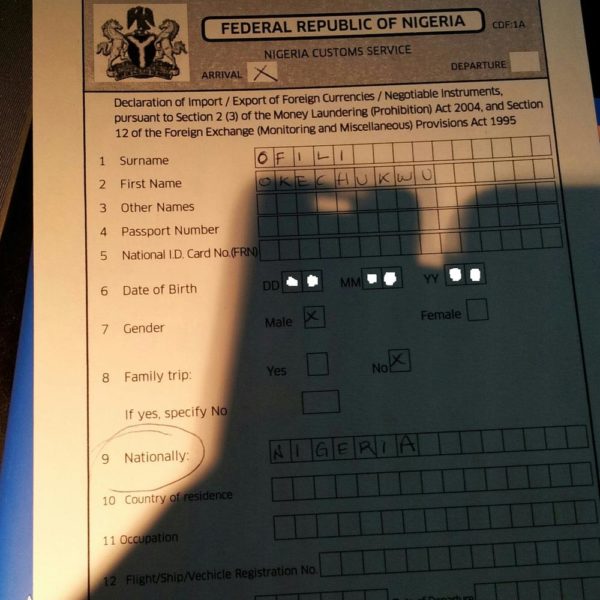 Just last year when I was entering Nigeria, I was handed an immigration form. Ignoring the fact that the print quality on the immigration paper was not the greatest, I could not but help to notice that the word “NATIONALITY” had been misspelled “NATIONALLY.” That was August of 2012. Fast forward to January of 2013 and I am handed the same form with the words “NATIONALITY” misspelled again and in the exact same manner. Now I am sure people are saying what is the big deal?

It goes back to the conveyor belt mentality. Whoever was in charge of printing those cards and putting it on the plane was not aware of the importance of those cards in defining Nigeria’s image. To a foreigner, it shows that Nigeria as a nation is not focused on getting simple things right, and if a nation can’t get the simple things right such as the spelling on a legal document, how can they get the complex things right?

I am sure that millions of Nigerians (some even reading this article) have passed through that airport and seen the exact same error I am talking about and I am quite sure that a couple of them would have pointed this out to the customs officers. I am also sure that even before being notified of this glaring error that some customs officer had already noticed it and informed their bosses about it. I am also quite sure that when the cards were initially printed somebody saw the error and spoke up, but probably was told to shut up and just put the cards on the plane.

But yet we all travel to other countries, we see the quality of their immigration cards but we can’t get the same quality on a simple piece of paper!

This is and has always been the issue in Nigeria. It’s not our lack of capacity to do things, but that we don’t have people in charge that consider that things are important enough to be fixed. If only we had more people like the conveyor belt boy in power, then maybe, just maybe things will be a little better.

Nigeria…the solutions are simple, but the excuses are plenty.

NOTE: It has been a year now and that card still exists with the incorrect spelling, let’s see how long it takes before someone realizes the problem is important enough to be fixed.

All pictures courtesy of ofilispeaks.com

Ofili is an award winning motivational speaker, author, success coach and entrepreneur who blogs about life, success and entrepreneurial excellence. Follow him on twitter , facebook or subscribe to his blog for more success TIPS!” To bring Ofili to your school or organization as a speaker simply go here.

He has written two books, How Laziness Saved My Life and the best-selling How Stupidity Saved My Life, to find out how they both saved his life visit ofilispeaks.com his latest book is titled How Intelligence Kills Us and will be coming out in the first quarter of 2013 (he hopes). To read his books on your blackberry text “laziness” or “stupidity” to 33110 (only works for MTN for now).

Need A Valentine Gift for that Special Lady in Your Life? Treat her to A Special Valentine Package from Denaki Lingerie

What to Do in Paris For Three Days, According to Patricia Bright