As reality TV continues to dominate internationally, Nigeria is not getting left behind with a new crop of offerings for the African market. Mo Abudu‘s TV Network, EbonyLife TV recently announced the wrap up of the filming of one of its flagship programmes, SISTAZ!.

Sistaz! is a described as “a compelling Reality TV Series about two sisters of Greek-Nigerian descent, the STAVRO sisters, who decide to check into the famous Eko Hotel in Victoria Island, Lagos, for a long overdue holiday reunion. While there, they meet STEPHANIE, a British-born Nigerian friend who has also checked in to relax from a busy schedule. Together, they set out on a 30-day roller-coaster to rediscover afresh the passion of sisterhood, friendship and the lively City of Lagos. However, their holiday soon turns into a mission when they host a party at the Hotel. When their diverse worlds connect, their attitudes explode with a bang.“

Despite a tight budget production, the team assures us that Sistaz is a world class reality TV show shot by a professional first class and crew aiming to redefine paradigms in Reality TV programming in Nigeria, Africa and beyond. 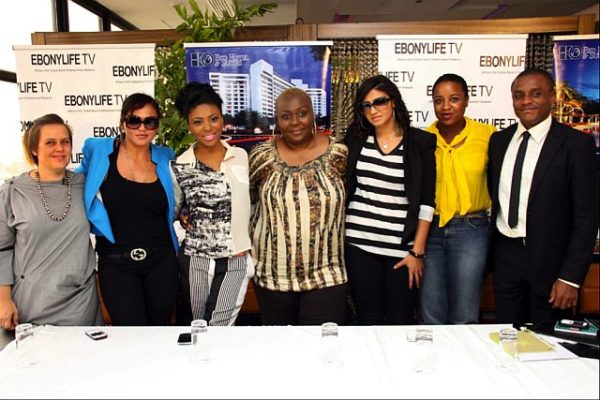 About the success of the filming, Pamela Ofoegbu, Director, Reality Programming Ebonylife TV, had this to say, “It has been an awesome, exciting and dramatic roller coaster ride as we watched events unfold daily. This is truly reality at its max.”

For Priscilla Nzimiro, Producer, Sistaz! “This type of project is the first of its kind in this market. It hasn’t been easy but we are glad we were able to pull it off successfully. This is just the beginning. We thank Eko Hotel and Suites for their support on this project.”

On the Reality Genre, Series Director, Sistaz! Heidi Uys, said, “in reality, making Reality TV takes you on a huge adventure into the great unknown. Every day, fantastic stories unfold as real people live out in a landscape that has been designed for them. Neither they, nor the director know their destiny until it’s discovered on camera everyday – it is riveting stuff and not for the faint-hearted.”

Apart from being the quintessential Reality TV Series, Sistaz! is also a show-piece and resounding statement in nationalistic pride and patriotism as it showcases a beautiful Nigeria and indeed Africa that the foreign media Channels may have deliberately chosen to ignore in favour of its preferred theme of Afro-pessimism and its attendant look and feel of doom and gloom.

To buttress this point, Executive Producer, Sistaz! and CEO EbonyLife TV, Mo Abudu said, “We wanted to make Reality TV that thrilled, with a great storyline, the glamour the gloss. We wanted to showcase the best of Lagos; that many would watch globally and say, is that really Lagos? Is that really Nigeria? Is that really Africa? And we will say, yes it is!!! We wanted to reveal an Africa never portrayed by most mainstream western media channels.”

Continuing on this subject she said, “What we see from them are the projects and women in villages carrying firewood on their heads. Of course these societies and realities exist, but so does the modern African city with all the trimmings of glamour; with beautiful and chic women. The village setting imagery portrayed by western media channels continues to undermine the progress made in Africa by African brands! However, this is what EbonyLife TV, through its programming, is poised to change. We are positioned to give African brands, big and small, an opportunity to be heard and seen, like never before, and in the light that they truly deserve to be seen! That’s why our Mantra at EbonyLife TV is ‘everything you think you know about Africa is about to change forever!’”

EbonyLife TV is Africa’s first Global Black Media and Entertainment Channel set to broadcast Pan Africa wide on the DSTV platform, and globally on Sky TV in the UK and DISH in the United States, with roll out plans also spanning Brazil, Canada and other parts of Europe.

The first TV Channel in Africa set to produce and broadcast over 700 hours of premium and original African content for a global audience, EbonyLife TV’s programming which cuts across drama, comedy, reality, lifestyle, talk, magazine, feature film and factual, is produced by Africans for a global black audience and is uniquely positioned to reach its target demography across an exciting multiplicity of media platforms, including TV, Web, Mobile, Apps and Live.

Sistaz! and other EbonyLife TV flagship programmes will be available for viewing on DStv Channel 159 in the coming months.