"The Wild One!" Idris Elba covers the March 2013 Issue of British GQ Magazine 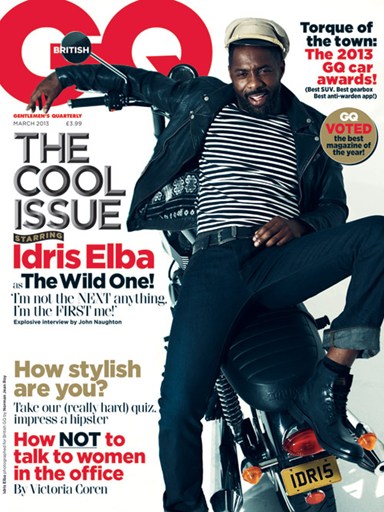 British actor Idris Elba was in Lagos for the Koko Concert this past Christmas season. While many were not so impressed with his “hosting” skills, the fact remains that Idris is still one of the hottest actors in Hollywood.
The actor who has Ghanaian/Sierra Leonean parentage is on the cover of the Cool Issue of British GQ for March 2013.

Here is what they had to say about their cover star.

He was The Wire’s most famous kingpin, but in 2013 Idris Elba is set to become Hollywood royalty, carrying Guillermo Del Toro’s mega-budget blockbuster Pacific Rim and portraying Nelson Mandela in an Oscar-bait biopic. In the March issue of GQ, Hackney’s no. 1 son shares all on his biggest ambitions, the new series of Luther – and those Bond rumours… Understanding the Woman With the “Attachment Complex”