It’s great to see more Nigerian stars are spreading their wings and publicizing their talent outside of Nigeria. Following the likes of P-Square, Flavour, Wizkid and Ice Prince who are almost constantly in and out of other African countries as well as Europe and the USA, Lynxxx and Olamide are about to join the ranks.

The touring life isn’t new to Lynxxx though who had a nationwide tour in 2011 and in 2012, performed a number of concerts outside Nigeria’s borders including the USA. While Lynxxx‘s UK Tour commences tomorrow, 21st March 2013 in Sheffield, Olamide‘s Europe Tour is slated to begin in 29th April 2013 just around the corner and end 29th May 2013.

It’s great to see our Nigerian acts get this big; big enough that they not only appeal to Nigerians back home but also to audiences far and wide, citizens in the diaspora included.

For more details on tour dates and inquiries, check out the posters below! 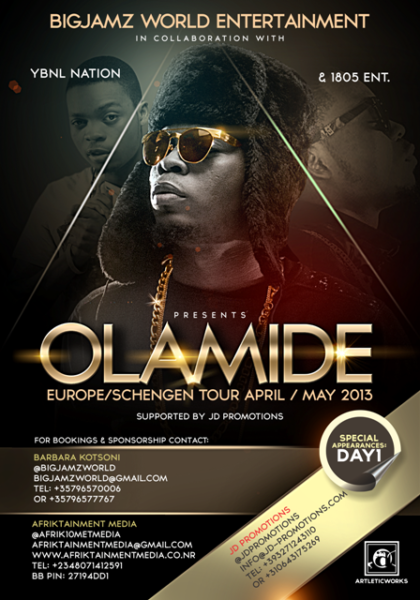