DISQUALIFIED! Tanzania's Contestant, Nando Has Been Expelled from "Big Brother Africa - The Chase" 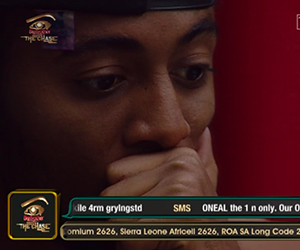 After a very heated altercation between Ghana’s Elikem & Tanzania’s Nando in the “Big Brother Africa – The Chase” house on Friday, 26th July, 2013, a verdict has been met by Big Brother.

After tonight’s eviction show, 28th July, 2013, Big Brother called all the housemates to the living room and replayed the footage of the very tempestuous argument that almost led to a fight, or with Nando involved, a ‘blood bath’.

Nando, who already had one strike for concealing a weapon to the Saturday party a while back, was then given two more strikes for his bad conduct, one for his attempt at violence and the second one for his concealment of a pair of scissors under his bed. Immediately the announcement was made, he was disqualified and expelled from the house.

On the other hand, Elikem was also given a strike for counter-provoking Nando during their altercation and will remain in the house.

You can also read the official press release from the Big Brother Africa Website down below.

Tanzania’s Nando has been disqualified from the Big Brother House.

After tonight’s Evictions that saw Annabel and Sulu being given the boot, Big Brother then gathered all of the Housemates in the living room.

Today Big Brother reproached Nando for the fight that he had with Elikem on Friday. The heated face-off with Elikem saw the two fellas exchanging fiery words between them. Nando is the one that instigated the fight. Instigation and provocation is a violation of the Big Brother rules.

For this fight Nando received his second Strike and Elikem was has served with his first Strike. Afterwards the Tanzanian was called into the Diary Room. He was given his third Strike for making threats against Elikem’s life, saying: “I feel like stabbing him. A nigga like that deserves to die”.

And he was also caught sleeping with scissors under his bed and this is not the first time that he has been caught with a weapon in the House. The troubled young fellow has had a dramatic nine weeks in The Chase. Last month he was served with a a Strike and a stern warning from Big Brother after he was found carrying a knife to the Channel O Party. The possession of weapons or intention to be violent in the House another violation of the Big Brother rules.

After the Diary session Nando was told to immediately exit the House. Big Brother then gave a warning to the Housemates to conduct themselves as adults.

Keep it locked on BN for the full details of the evictions and nominations.