It's Phyno! Check Out the Nigerian Hip Hop Star on the Cover of MyStreetz Magazine's August 2013 Issue 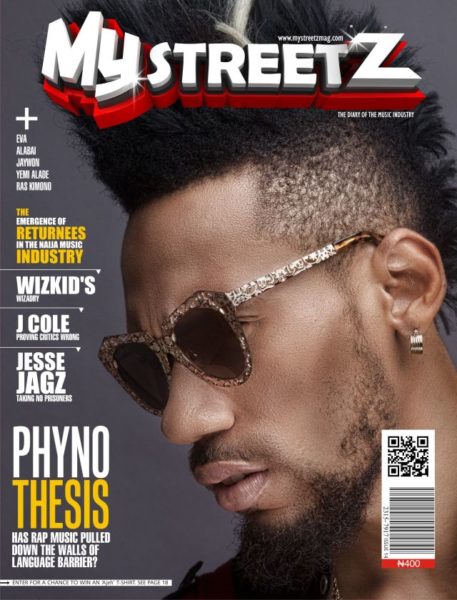 “At Mystreetz magazine, we don’t just tell stories, we share History with you.”

In the new issue of the Nigerian Hip-Hop-centric monthly, Mystreetz Magazine, the indigenous Igbo rapper, Phyno takes the cover looking fresh in his signature mohawk. The rapper who has gone from minor hits “Multiply” to major hits “Man of The Year” and “Ghost Mode”, has broken some language barriers for Hip-Hop in Nigeria and talks about his ‘grass to grace’ story in the new issue.

What do you think about the cover?

Here’s what Sesan Adeniji, publisher of Mystreetz Magazine, had to say about their new issue:

“About a decade ago, I attended an emergency music meeting with some of the most respectable veterans and spokesmen of the Nigerian music industry. They were concerned about the infiltrated sound called Hip-Hop/ Rap music. At the end of this meeting, these veterans concluded that this genre was never going to stand the test of time and they were right as of that moment, because Rap music had not found elements to connect with the local music lovers all around Nigeria but they were also wrong because the most constant thing in life is change; most importantly, if it driven by a young generation who are as relevant as those of the Arab spring.

“As Rap music continued its search for a wide acceptance from the non conformist generation to the pidgin English era, the influence of those that defiled the odds to infuse the Nigerian Northern, Western, Eastern/southern language into the Hip/hop and Rap music genre seem to be the reason why Rap may have succeeded all around the nation. With the success of Olamide, the final victory for Rap music might be the PHYNO THESIS. Has Rap music finally pulled down the walls of language barrier?”

Check out footage from the magazine photo shoot

Move Back to Nigeria: He’s A Finance Solicitor with an Eye on the Ball! Read Deji Adegoke’s Views on Moving Back to Practice Law in Nigeria