Another One For The Christmas List! - “Si” by Giorgio Armani now in Nigeria 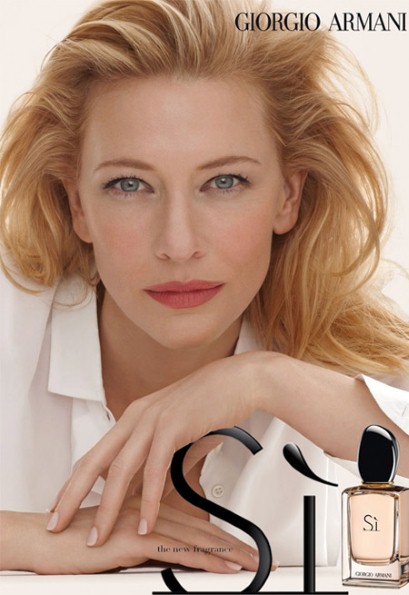 When I spotted Giorgio Armani’s Si at the airport, it made my head turn. For me, the perfume section in an airport is like a toyshop for a kid. Anytime there’s a new perfume, there’s a large display with testers and of course, the face of the fragrance – that represents what the scent is supposed to evoke. How can a girl say no?!

I saw Cate Blanchett – graceful Hollywood actress, mother of three – with her sculpted face and effervescent smile. I saw the bottle – with a black cover that looked like a jewel, a golden ring atop a pretty vibrant nude bottle. Then I saw the words – Si.

It spoke to me.

Si is the Italian word for ‘Yes’. Giorgio Armani – the designer of the perfume and his fashion house – is Italian, so of course it means a lot to him. He must have had a strong mother growing up, who allowed him to develop his creative muscles designing and honing his eye for fashion. He probably saw her dressing up many times, accompanied her to shop … well that’s what I imagined!

For me, Si reminds me of a girl who travelled to Italy after secondary school to study A-Levels for two years. It represents the time I came out of teenage-hood. It represents becoming a woman.

I walked closer. The attendant turned around and smiled at me. He went on to talk about the perfume and asked politely if I could hold out my hand. I said Yes, I mean Si ☺. He sprayed a pink and black ribbon with “Yes to”/”Si alla” phrases on it and held the ends of the ribbon then rubbed it on the inside of my wrist, then tied it – a different experience that had me blushing.

I raised my wrist and inhaled. The blackcurrant and vanilla hit me. It was sweet, floral and as an Eau De Parfum, strong at the same time. When I read up on it, I saw it had Rose de Mai and Freesia, grounded with earthy Patchouli and Blond Amber Wood. So I could see why it lingered on my skin hours and hours later.

Si is for the strong yet feminine woman.

What have you said ‘Yes’ to lately? Say Yes to Si this Christmas.

Si is available in Lagos at Montaigne Place & Essenza. I’m off to get myself another bottle …. ☺