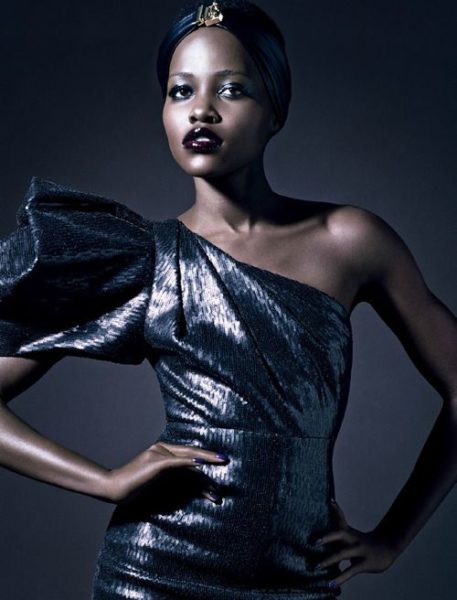 So True, So False!

There are lots of stories that we hear about that we definitely give a side eye (you all know that side eye moment right?)…and this is one them.

The National Enquirer has ran many “exclusive” stories over the years including Jennifer Aniston is pregnant which clearly wasn’t true as well as Beyoncé and Jay-Z are sad that their good friend Wendy Williams didn’t defend Queen Bey with rumours that she wasn’t carrying Baby Blue.

The talk show queen revealed she doesn’t really know them.

And now they are back with another story. This one involves Hollywood’s New It Girl Lupita Nyong’o.

The American publication states that Brad Pitt has gone “gaga” for Lupita who stars in his produced 12 Years a Slave and Angelia Jolie is jealous.

The mag goes on to claim that Brad, was able to hide his crush from Angelina for a while, but he let the cat out of the bag when he publicly gushed about the Kenyan beauty at the Producers Guild Awards.

After the awards show, Brad flew to Australia to reunite with his partner and their six children in Australia.

A “source” reveals that Angelina read the riot act when he arrived. “He wasn’t welcomed with open arms. She told him that he didn’t need to make his ‘crush’ on Lupita so obvious to the entire world. Angie is working her tail off, juggling directing duties and caring for their kids. Meanwhile, Brad is running around on the other side of the globe acting like a carefree bachelor.”

At the Producers Guild Awards, Brad kept close to Lupita throughout the event and when Leonardo DiCaprio pecked her on the cheeks, he reportedly jokingly warned Leo “Hey, man, stay away from my girl!”.

The National Enquirer’s source goes on to state that you’ll think Brand and Lupita were dating, he’s so smitten with her that he is negotiating a film so they can star in it together. So she can be the next leading lady.

The source concludes by saying “Brad’s fixation with Lupita isn’t sitting well with Angie. Despite his devotion to her and their children, Angelina can’t let go of the nagging worry that Brad is on the prowl for the next hot thing to come along in Hollywood.”

Yes Brad can have a crush on Lupita (who doesn’t?) but will Angelina be that insecure? Side eye any one?

Move Back To Nigeria: The Challenges Add Colour to Life! Read Tunji Ogunkeye’s Interesting Story of His Big Move

Too Sexy for Words! Watch Shakira Feat. Rihanna in “Can’t Remember to Forget You”