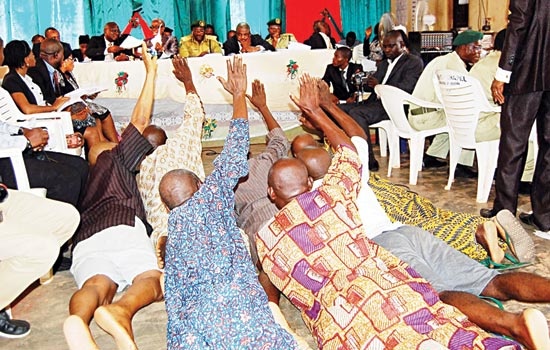 Some inmates of Agodi Prison, Ibadan, appealing to the State Chief Judge for a review of their cases

The prisoners who were  released (five females and six males) had been accused of  ‘minor ‘offences such as disturbance of public peace, stealing, and assault, Punch reports.

Adeniji warned the freed inmates to desist from acts that could potentially bring them back to prison.

“You have learnt your lessons and if you should return here for any reason, there would be no pardon,” she said.

The de-congestion exercise will continue in a few weeks, and will be conducted in cycles thereafter, until the prison is adequately de-congested.

In view of this, some inmates have been pleading with authorities to reconsider their cases, in hopes that they too will be released.