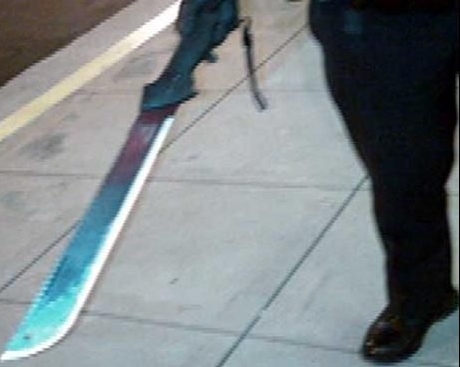 After the Nigeria vs. Iran World Cup match that ended in a scoreless draw, many fans of the Super Eagles were upset about the outcome of the game.

However, one man Sunday Usman, was so upset, that he allegedly attacked some viewers, including a Ghanaian for mocking the Nigerian team for their inability to score a goal, Vanguard reports.

Usman was reportedly drunk when he attacked the fans on Monday night at a football viewing center in the Ilasan area of Lekki, Lagos.

The Ghanaian fan named Kofi, was said to have sustained deep cuts while others managed to escape from the viewing centre.

According to an eyewitness account, here is how the incident occurred:

“…Kofi, started booing the Super Eagles over their failed attempts to score a goal.

Usman staggered to his feet and warned Kofi to stop showing solidarity with Iran. But Kofi continued, saying he had every right to support whichever team he liked. Some viewers, who were also not satisfied with the Super Eagles performance, supported Kofi.

Usman left the bar, threatening to deal with Kofi . We all thought he had gone to sleep. But to our surprise, he came at the tail end of the match, dangling a cutlass which he used on anyone at sight. Kofi could not escape. He had the deepest cut.

We all fled for our lives and by the time we summoned courage and disarmed the drunk, Kofi was found on the ground in a pool of his blood.”

Kofi was reportedly rushed to a private hospital, where he is responding to treatment.