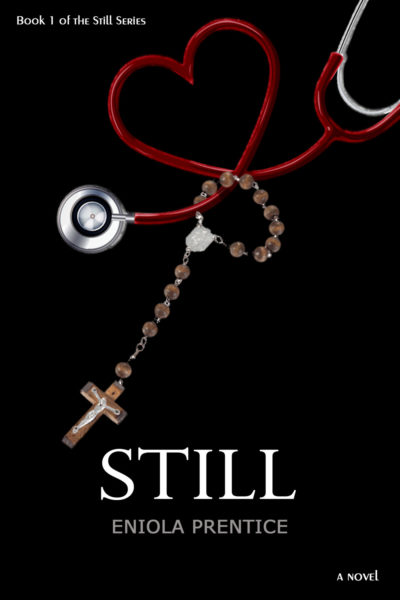 Right on cue, Tina came, barely holding on to three questionable-looking drinks with Nikky right behind her.
“Look who I found,” Tina said.
She squeezed herself in the small space between Irene and me, and the space fit her petite body perfectly. She looked even more beautiful with makeup on which accentuated her perfect doll-like features, especially her brown cat’s eyes.
“Nikky!” I screamed. “You look really gorgeous.”
“You look nice too,” she said, hugging me tightly.
I hugged her back half-heartedly. I hate the physical interaction required for embraces. It was an invasion of my private space and a breach of the invisible line I let few past.
But I liked Nikky, so she was allowed to breach that line.  She glanced at the woman in the red dress and her posse dancing in front of our couch and said, “They seem to be having fun.”
“Is that Ego you told me about?” I asked, edging closer to her.
“Yep, I don’t know about her. I haven’t decided if I like her.”
I chose my words carefully and replied, “We don’t know her, Nikky.”
“I mean, where did she get her outfit from? Whores ‘R’ Us? That dress is too tight and too short.”
We both giggled like naughty school girls.
She continued, “I am just good with the auras of people. I am an expert actually and I am not sure about her…”
“What exactly is an aura?” I asked, amused.
“Well, an aura is the vibe someone projects. It’s almost a spiritual, emotive thing. If we have time I will tell you of my history of spotting bad auras of bad people.”
“Hmm, I look forward to this conversation,” I said holding back laughter.
We were interrupted by Damien, a classmate I met previously during orientation.
“Hey, mind if I join you girls?” He squeezed himself between Nikky and me without waiting for an invitation.
Nikky whispere
d in my ear, “Tina warned me about Damien. He’s a weirdo. I will leave you two at it.” With that, she grinned and quickly slipped off the couch.
Damien turned to me with a smile and said, “So, Sola was it?”
I nodded, and he continued, “How long do you think the average man can hold his breath?”
“I don’t know.”
“Two minutes.” He grinned like he had just made the funniest joke in the world.
I sighed inwardly. Tonight was going to be a very long night.

***
Damien didn’t seem to notice that I quickly lost interest in our conversation. He subsequently tried to engage Irene, but she ignored him also. He finally gave up and bid farewell to both of us.
Irene said, “Wow, he was so weird, and his breath stinks. He smelt of garlic and onions!”
“I feel bad for ignoring him, but I couldn’t take it anymore,” I replied.
“It was horrible—” She stopped mid-sentence because something caught her attention.
“Hey, isn’t that Nikky making out with that guy?”
I turned my head slowly and was astonished to see Nikky and her male friend plastered against the wall, kissing furiously.
Irene whispered in my ear, “I know that dude! That’s Tayo, and he’s in our class.” I followed Irene’s gaze and watched the couple, who were both obviously drunk, as they kissed passionately.
“I think we should keep an eye on Nikky so no one…takes advantage of her. She’s a little tipsy,” Irene said
I nodded and watched them silently.

The guy turned slightly and glanced at us on the couch, obviously gawking at them. He broke himself away from Nikky and then stared at us directly.

Then he grinned and pulled Nikky to a dark corner of the room away from our field of vision. A feeling of foreboding came over me, and I realized there was something vaguely familiar about him.
No! No! Sola, stop it, I admonished myself. But I couldn’t let go of the sinking feeling. God! God! It can’t be him. It was dark, and maybe I was tipsy. It couldn’t be, but what if it was? I had to make sure.
“ Are you okay?” Irene asked. “It looks like you have seen a ghost.”
No. If he was who I thought he was, I had just seen a nightmare.
I composed my expression and replied, “Nothing, just tired. So this guy, Tayo, what is his last name again?”
“Tayo Smith,” Irene replied.
Immediately Irene said the words I dreaded, it took every fiber of my being not to scream in pain and anger. It took every fiber of my being not to begin to shake uncontrollably.
“Okay,” I replied, keeping my voice monotonous and biting my lower lip to prevent the tears that threatened to fall.
“Are you okay?” Irene asked again. “What did I say? Do you know him?”
“No, no,” I replied quickly, but my tears were dangerously close to falling and unraveling secrets I had locked in my heart.
I got up from the couch abruptly, ignoring Irene’s confused face.

Away from Irene’s examining eyes, the tears began to fall uncontrollably. I heard someone crying, a guttural crying, and I didn’t recognize my own voice. I bumped into dancing couples, boisterous conversation, and the roaring laughter of my classmates, all oblivious to the fact that my carefully constructed existence of normalcy was going to be ripped apart.
I made my way to the door with my eyes blinded by tears and my heart filled with a searing pain. I walked not knowing where I wanted to go, but knowing I wanted to be away. So I began to run, run as fast as my legs could carry me, away from the shame, pain, anger and regret in Tayo Smith. My barely recognizable sobs reminded me that I was indeed still alive.

Still can be purchased on  Amazon and Barnes & Noble.