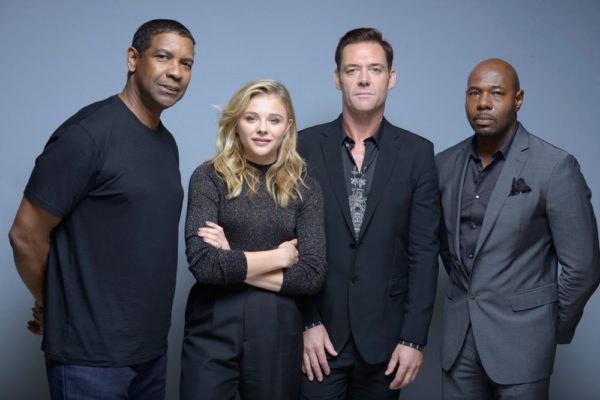 In The Equalizer, Denzel “Eff-Yeah” Washington plays an ex-special forces operative, Robert McCall, who thought he had retired to a highly routine, painfully boring, extremely quiet and private life. While he spends his days working at a local hardware super store, he spends his sleepless nights at a local diner reading books and having chats with fellow night-crawlers.

When his most frequent chat partner, a young prostitute named Elena (Chloë Grace Moretz ) gets beaten up by her Russian Mobster boss, McCall has to return on a path which he thought he had left behind and “equalize the odds”. The only problem is, this isn’t just a group of mobsters, it’s a criminal organization.

The Equalizer has its roots in the 1980s TV series with the same title. The movie reunites Training Day director Antoine Faqua and Denzel Washington after 13 long years. While the trailer promises a non-stop action packed thriller, The Equalizer is actually more of a moody, dark, action, drama and thriller with a very straight forward, highly predictable and cliché story. But with Denzel Washington in the lead, you can be rest assured that the man will sell you a movie where he plays the role of a 12 year old girl-scout selling cookies for 3 straight hours.

Just when we thought Faqua’s movies weren’t going to get darker, moodier and more violent after Training Day and Olympus Has Fallen, he gives his darkest and most moody movie till date. I loved the style of shooting the action scenes where everything slows down and we see things from Denzel’s perspective before they happen. I also loved the style of cinematography which gave the movie a ’90s action movie feel.

The character development in the movie was either very poor, or deliberately withheld to gear us up for later sequels (as announced already by Sony). Richard Wenk (The Expendables 2, The Mechanic) gives us a very vague back story about Robert McCall and basically every other characters there is in the movie. The movie also has a lot of subplots which “almost” go off track every now and then, but somehow manages to find its way back.

In the end, its an average story with nothing special or new to it.

All the flaws in the story are covered up by a powerful performance from Denzel who had all other characters and the entire movie held up by his performance. Chloë Grace Moretz who doesn’t feature much in the movie, but does enough to convince me she will earn an Oscar in the near future (when the right role comes inevitably) and the villain played by Marton Csokas.

My favorite scenes in the movie were definitely when Denzel and Marton met face to face. Their scenes are electrifying, tense and keeps me alert of an impending showdown which would be epic. Unfortunately, the showdown was anything but epic. Pardon me for expecting more.

All other supporting actors also deliver greatly without question and kudos has to go to Faqua for bringing the best out of his cast.

In the end, The Equalizer is a feel good movie I will definitely see again. It’s a story of a “Knight in shinny amour coming to the rescue of his friend” so expect a lot of superhero ish stuff.

It gets a Sodas and Hotdog from us at S & P HQ.

So, have you seen the movie? Which will you prefer to come save you? Robert McCall (Denzel Washintonton) or Bryan Mills (Liam Neeson from Taken)

By the way have you seen the new Trailer for Tak3n (Taken 3, yes, there is a third one and it looks awesome!) Check it out here.

Review is written by M.Y