2014 Epilogues: My Cracked Lips Give Praise From A Joyful Heart - Gbenga's Amethyst

2014 has been a very interesting year. As it comes to an end, BellaNaija seeks to showcase a human interest segment, dedicated to looking back at the year. We’ve teamed up with a diverse group of individuals and asked them to share how their year has been. The brief was ‘a personal look back at the journey thus travelled. The idea is to use 2014 as a focal point. The honest and heartfelt piece should talk about your ups and downs / victories and failures – a general self assessment. It should be a raw piece which shows you as a person – the human angle is important.

Each of the participants has graciously sent us amazing pieces about themselves. As you read these pieces, and take stock of the year you’ve had, we encourage you to get inspiration from our 2014 Epilogues.

The 2014 Epilogues gemstones will be dropped at 2pm everyday till the end of the year!
***

Tears threaten to return to my eyes as I type this. I have just visited my mum on Christmas day 2014 and she feels better, looks happier, sounds optimistic, banters again, and she is gradually learning to stand on her two feet unaided.

This long, emotional journey started in the early hours of May 17, 2014 when I read my younger sister’s BBM personal message “What should I have done?” I instinctively called her a few minutes later to ask what those words meant, only to find out that my mum, our mum, had slumped earlier that morning. The doctors would later confirm – after running some tests – that she had suffered a ‘minor stroke’ – their way of telling us it wasn’t really that serious. She would recover faster than earlier envisaged; even after she received the news of her mother’s passing away two weeks later.

I wish this was all fiction, but it isn’t. “Iya Gbenga”, as we grew up to know and call her, suffered another stroke in September, barely five months after the first. Thankfully, she survived this too, and we are grateful to God for this chance to still have her with us.

I don’t care that I have had to foot more than 80 percent of the bills this time around. This dogged fighter, all glory to God, spent her last dime on my sister and I! Nothing we do can ever be enough to pay back. These days she smiles and shares jokes regardless of the loads of pain beneath the surface. That’s the spirit!

2014 has been a one-of-a-kind; a few remarkable victories and quite a number of not-so-pleasant experiences. It felt like playing in the Champion’s League for the first time in a long time and competing with some of the very best, most experienced/formidable teams in the world.

This year, death came closer than ever before. I lost quite a few people, and more people that I know, lost people too. Sorrow mixed with fear and I struggled with why good and vibrant people like Kunle Olaifa, the HR Manager I never had, died so young. I had sleepless nights and anxiety at the thought that the very strong woman who had single-handedly raised my only sibling and I could pass on way before “eating the fruit of her labour.” What was even the point of life if terrible things happen to great people? I remember once praying fervently to God back in the university to please spare my late maternal grandmother so I could succeed and give back to her in a big way before she would be called home to be with the Lord. I never got to do a good fraction of what I would have loved to do.

In all of these, I was (and remain) persuaded that God knows and sees everything; He truly cares and sees the big picture; and He would never leave us comfortless. It’s a hard truth, but I realized again that there’s more to life than just the cliché narrative of “get a degree, get a job, get married, have kids, die someday”. The passing away of Dr. Myles Munroe & team members – and then Chaz B – only further drove home the point that we’re all living on borrowed time.

Today, you are full of life, yet tomorrow might just be the expiry date on this side. Kunle’s life (there were just so many testimonies about his impact in the HR circles!) reminded me from the distance that sometimes it’s more about the quality and volume of impact than the length of years spent on this planet.

2014 was perhaps the year in which I took ill the most in recent times. I was also super-distracted and confused many times and it seemed too much was happening too fast. But, I have learnt to be stronger and tougher and take care of myself because no one else would. Mostly.

I’m grateful to God for the grace to leave my comfort zone a couple of times. Changing jobs in the third quarter was not such a nightmare after all; I look back and I am glad I made the right choice, following a growth path that opened up in a much different industry and setting.

Though I struggled to write little in 2014, I summoned the courage to compile an e-book and most recently recorded one of my poems. Mehn! I doff my hat for OAPs o. The chronic perfectionist in me almost wouldn’t release this track. Oh my! {You can listen to/download the spoken word poetry track, “Cracked Lips, Joyful Hearts” here: http://bit.ly/1B6NdMV} 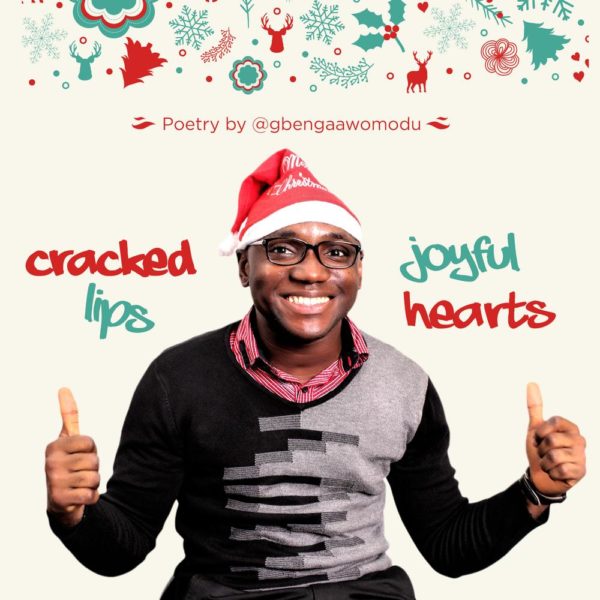 If there is any single thing I want to achieve in 2015, it would be to focus on fewer things. I have to say NO to many more projects and build trust with the few I take on. Committing to more than one can handle, in view of several unplanned extra tasks and responsibilities that life throws one’s way daily, can be the fastest way to lose trust and credibility.

I will definitely write more and execute a few projects dear to my heart and central to my purpose here on earth.

My copy of Greg McKeown’s “Essentialism: The Disciplined Pursuit of Less” is staring at me across the table. For the rest of the year, I just want to crawl back into my quiet space, read/listen to select materials, rest a lot, recharge and get inspired for the New Year.
Happy holidays!

Related Topics:2014 EpiloguesGbenga Awomodu
Up Next