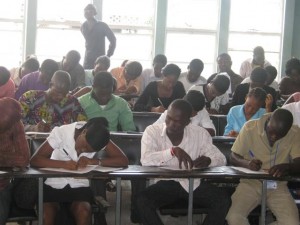 The expectations for the November/December 2014 West African Senior School Certificate Examination are unfortunately not up to par.

Punch reports that out of the 246,853 candidates who sat for the examination, only 72,522 candidates, representing 29.37 per cent, obtained credits in five subjects, including Mathematics and English Language.

The percentage of failed candidates are 70.63.

Charles Eguridu, the Head of the Nigeria National Office, the West African Examinations Council, disclosed that there was an improvement from last year’s result. In 2013, 80, 135 candidates obtained five credits in five subjects including Mathematics and English Language.

Eguridu also said there was a marked reduction on malpractices, due to the biometric registration and customised mathematical sets with inbuilt calculators.

28,817 candidates, however have their results withheld for various cases of malpractice. All cases are currently being investigated.