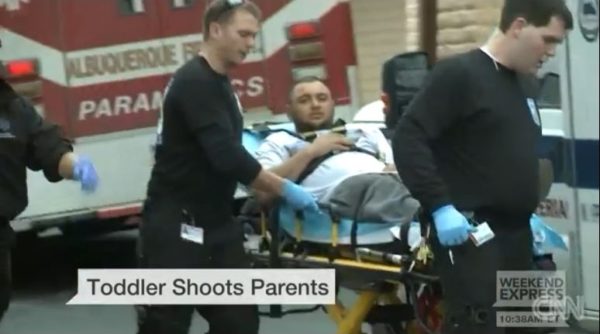 A 3-year-old boy  in Albuquerque, New Mexico shot his father and 8-months pregnant mother on Saturday.

The incident occurred at a hotel room in Albuquerque, CNN reports.

Police authorities say the boy took the handgun from his mother’s purse and subsequently fired a shot, which hit his father’s lower backside, exiting his hip. The bullet then hit his mother’s right shoulder.

The father has been treated and released from the hospital, however; the mother is still in the hospital and is said to be in stable condition.

According to reports, the boy’s two-year-old sister was also present during the incident. They are currently under the care of the Children’s Youth and Families department.

The Albuquerque District Attorney’s Office is currently investigating the case, and will decide whether the parents will be charged with criminal negligence.

Egypt Court Condemns 183 to Death for Lynching of Policemen