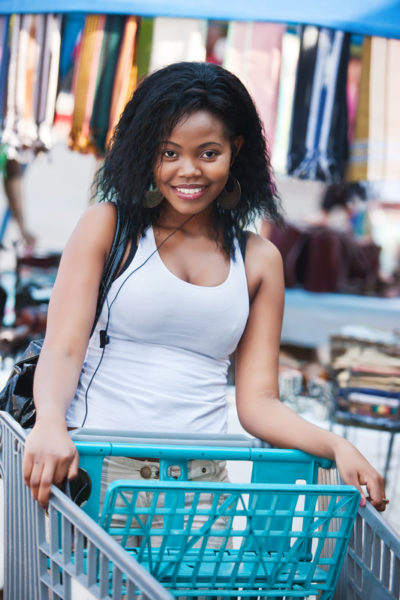 Imagine my surprise when I found the word ‘Haggling’. It didn’t sound as horrific as I had come to know the act as. The verb ‘Haggle’-‘To argue persistently over the cost of something’. Now, you have to understand that in the world where I was coming from, that act of arguing persistently over the cost of something was not as nice sounding as the word makes it seem. My mother is the Chairman of Pricing Association of Nigeria(Can’t tell me nothing! The woman can win at Haggling Olympics!) Growing up, the words “Come let’s go to Idumota” filled me with utmost dread, and I’ll tell you why. First of all, my mother didn’t believe in retail shopping. According to her, her household was way too big to buy things in units, so it was better to buy in bulk, and Idumota market was the place to go. We would park the car in Marina and then start a 3 mile walk into the heart of the market. Then, when we get to the place where they sell provisions and I’d expect my mother to bring out her list and start buying. It won’t happen. At our first stop, we will first check if they have Lux, Sunlight and Close Up; , then we will find the prices – so let’s say 500, 400 and 450 respectively. But, we won’t buy there oh! We will now continue the walk further into the market in search of a cheaper store. After another half a mile, she will then stop at another shop to make the same enquiries. This time, the prices will be 500, 350 and 450. At this point she will then begin this business of pricing.
My mother: “Shey ko gba 220 fun pali Lux yen ni?” {Are you sure you can’t sell the carton of Lux for 220?”} (Please note that the marked price was 500)
Trader: “Ah, ko gba. T’o ba gba mo ma ta fun yin. 500 ni jale” {No, I can’t sell at that price. If I could, I’d sell to you. The best I can do is 500}

This back and forth will continue for another 10 minutes, if I’m lucky. On bad days, my mother will find a nice bench in the stall and continue hoping for a miracle. Sometimes the trader just gets angry and ignores us for more serious customers; other times, Mother’s tenacity will frustrate the trader into shaving 50Naira off. Anything to get us out of her stall. And those women who bow to the pressure are the reason why she strongly believes that you can, with frustrating haggling tactics, get an extra 50 Naira to spend on other things.

I HATE haggling… with a passion. It is synonymous with heat, sweat and most importantly, it is the greatest time waster of ALL time. I was told that when I start earning my own money, I’d appreciate the need to get the best price possible, given a limited resource bank. When I started earning money my feelings about standing about waiting for 500Naira to become 250 just because I could talk and talk  still didn’t become a favourite pastime.

While I understand the sentiment of being persistent and hoping that someone will change their mind,  I also have learned to compute my time in money. Why am I spending 45 minutes trying to get you to give me a 20Naira discount when I can spend that time earning 400Naira?

I was in the car with someone who wanted to use a GTB cash machine because of the interbank charge. We drove from Lekki, past ALL the machines in Victoria Island, to find a working machine on Awolowo road. We got to the Awolowo road machine and guess what? It was broken. I mentioned that we had spent more than 100Naira in fuel just to reach a machine that won’t charge us 100Naira. My friend argued that sometimes it was a call you had to make especially when you wanted to withdraw 1000 and knowing that the charges would set you back to 900. In situations like that you make the most economic decision. “Small small money becomes an ocean in the long run. Fine margins matter when your paper isn’t that long.”

It is the same principle that works with people who would rather go to the Tesco a mile away to buy a bagel than buy from the Waitrose a few feet from their door. It’s about stretching that one £1 for as long as it can go. Besides, if you can buy a bottle of juice, a bagel and a small box of mint, why not just walk to that place that is one mile away. It’s all part of FitFam. But there’s a Yoruba adage that loosely translates to “Leg is faster than car, it will tell on your body”. So essentially, what you’re saving on doing the FootRun, you’re paying back in the Aboniki costs for massaging your calf muscles.

Being able to haggle is a skill that requires patience, and a certain measure of financial prudence. However, is there a place where one draws the line at haggling? For instance, if you’re in charge of buying supplies for the office, do you whip out your haggling skills and start pricing Rose tissue?

Then there’s the special group of people called Couponers! I used to be a faithful Couponer till I realised I was always forgetting the coupon at home on the day I visited the particular shop. Frustration made me stop keeping them. Now, I just tear them and toss in the trash. Ain’t Nobody Gat Time For That!

Well, like everything in life there has to be a balance. One has to know what’s important and what’s not… wait, am I about to start pontificating?
Goodness gracious! I’ll stop now.

Are you team ‘Money is for spending?’ or ‘Team, squeeze that last 35cents off?’ Please share some of your most interesting bargain hunting and extreme pound stretching measures.

Nicole the Fertile Chick: Team 1 or No Tubers