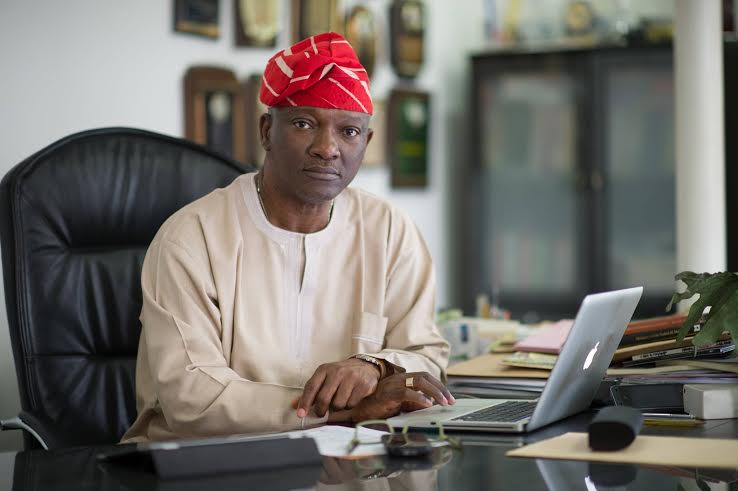 In light of the recent Presidential Elections in which President-elect General Muhammadu Buhari of APC emerged as the winner; rumors have been circulating that his victory indicates an APC- political alignment for the states, especially for Lagos state in the upcoming governorship elections.

In light of this, PDP Gubernatorial candidate, Jimi Agbaje from PDP, is using this medium to enlighten and further clarify his stance on this issue and further reiterate that different political parties continue to work in unison for the best interest of Nigeria and her people.

Dear People of Lagos, you’ve probably heard the new rhetoric that APCs spin-masters have been spewing out in the last couple of days stating that if Lagos is in the opposition, the Federal Government will deny Lagos a lot of benefits. Just yesterday, a few well meaning Lagosians had sent us Facebook and SMS messages asking for my take on this issue so I’ve decided to speak.

First, I wonder about the soundness of this argument especially after listening to President-elect General Buhari‘s acceptance speech where he clearly stated “There shall no longer be a ruling party again… We shall never rule over the people as if they were subservient to government.”

This basically spoke to our better-angels as a people and our sense of community as Nigerians. If so, then where’s the logic in the argument? Is APC Lagos by the nature of this “aligning Lagos to the center” statement, now inferring that General Buhari intends to run a vindictive, partial or insensitive government? Well, that’s not for me to answer and it’s clearly not the focus of this piece.

What I know, however, is that Lagos has always made progress in spite of being in the opposition and right now it will be to the benefit of democracy and the whole country to have a watchful police, as opposed to both power houses – Lagos & Abuja concentrated in one party. In fact, if my memory of history serves me well, Lagos and the FG have never been in the same party. Our development as a state is as a result of our ingenuity, tenacity and drive as a people.

And it’s clear that Lagosians can see through this total botch of logic. During late Pa’ Awo‘s time, the Action Group led Lagos while the NCNC led the FG. In 1979 up until 1983, LK Jakande‘s achievements were under UPN even though President Shagari was in NPN. In 1992 Governor Otedola was NRC and SDP led the FG before the June 12 annulment.

In 1999 Tinubu was AD, FG was PDP. In 2007-2011, his excellency, Governor Fashola was AC/ACN/APC while the FG led by Yar’Adua was PDP. Under Yar’Adua, the FG released withheld funds to Lagos that had been blocked by his predecessor despite being in opposing parties with Governor Fashola. You see, our edge as a state has always been about our collective ability to stay ahead of the curve with or without favour from the FG.

That said, it’s important that we put in context what is really happening in Nigeria. The yearning for change that has clearly swept this nation is one that supersedes any one man, political party, tribe or religion. Put simply, it is a statement against the status-quo. A clarion call by the people for leaders who will put the people’s interests first before aggrandizement and petty bickering that seems to have become the norm in politics. To politicians, leaders and people in position of authority including myself, it is a call that we cannot stand against. It’s one that we must all comply with to ensure that we build a better society and a greater Nigeria.

Now, given that our message of transforming governance in Lagos to ensure that we cater not only to few elites but the generality of the greater good of the people of Lagos is resonating with Lagosians – both indigenes and non-indigenes alike, one can only expect the opposition to throw everything including the kitchen sink. It is clear that arguments of this sort are only the rumblings of a small group of people determined to hold on to power at all costs in Lagos. Even on the streets, one can clearly see the destruction of our adverstising material from the Third Mainland Bridge right down to Ikoyi; it’s been fatal. But I dare say that the handwriting is on the wall. The people of Lagos, in this election are determined to CHANGE the status-quo and they will do everything in their power to protect and guard their votes.

As we approach the end of this tightly contested election race in Lagos, I’ll encourage voters to be careful about what I call last-minute divisive tactics, which again is to be expected at a time such as this. My opponent will keep on making insinuations and attempt to pre-empt how I willgovern rather than share with us his own unique take on how he intends govern. It is political silly season, I get it. But at the end of day, the result speaks for itself and the people are wiser.

I pride myself on the fact that we’ve run a pretty robust, disciplined and inclusive campaign where people from all works of life have supported our efforts – technocrats, party members, non-party members, youth volunteers, indigenes and non-indigenes alike. We’ve led by example and remained honourable even in the face of intimidation. We’ve highlighted bold plans that will enhance the contributions of our youth, artisans and civil service to society. We’ve laid out potentially path-breaking reform plans to curb corruption in government by leveraging web technology that will not just help voters to track government procurement (as we currently have) but also government spending and expenditure thereby making the process transparent so that we can hold our leaders within the public service accountable.

We have not shied away from debating major issues and presenting our ideas on how we intend to expand this economy and ensure that ordinary Lagosians are not over-burdened by the weight of unfair taxes. We have campaigned on ideas not propaganda and provided Lagosians with an insight to what real change looks like.

That said, we cannot go to sleep and be under any illusions that this will come easy. We will need to fight for it. I am calling on all people to defend our voice as a people come April 11th.

Stand at the polling units, monitor the polling officers, request for the number of accredited voters BEFORE you return to vote. Democracy must prevail in our great state, defend your votes, defend the polling units, protect Democracy. It will be my honour to serve as your Governor – a man capable of making his own decisions as I have always done in the past. Quite frankly, I’m not sure anyone can say the same of my opponent.

Disclaimer: BellaNaija is non-partisan. All viewpoints expressed above are solely Jimi Agbaje’s and do not reflect the views of BellaNaija.

The Makeup Faux Pas that Left One Woman Paralyzed for Life