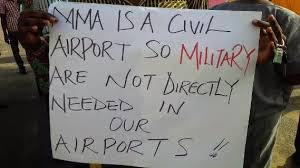 In the aftermath if the incident, FAAN workers on Monday barricaded the the headquarters of the agency in Lagos.

Read the report by Premium Times:

A witness, who asked not to be named, told Premium Times that activities at the FAAN headquarters have been grounded by the protesting workers.

It is unclear whether the protests are still ongoing.