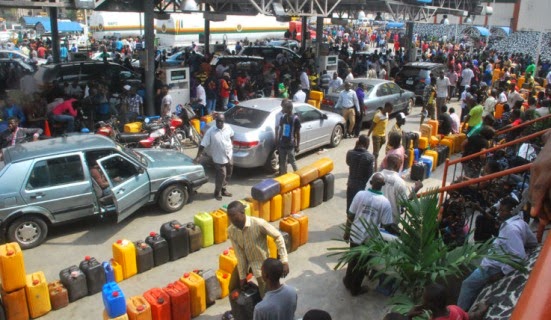 Ever since CEO of Capital Oil and Gas Industries, Ifeanyi Ubah, announced that all Capital Oil stations would commence selling fuel, Nigerians have flocked to the venues to take advantage of the opportunity.

However, according to Punch, soldiers on Monday stormed the Capital Oil petrol station located at Ojodu-Berger, and proceeded to purchase drums of fuel after scaring consumers away.

Officials of the Nigerian Army on Monday took over the Ojodu Berger outlet of Capital Oil, buying petroleum products in drums, after scaring away thousands of consumers.

The armed personnel came in the guise of maintaining peace and order, but they soon abandoned their primary responsibility for fuel racket. They shoved, maltreated and sent away those who were on queue to be attended to, thereby gaining access to have their drums loaded with fuel.

As of press time, the unregistered white Isuzu truck they use for the ‘deal’ had visited the filling station for the fourth time.

The fourth truck was being loaded as of 8:50pm.

The vehicle, on each visit, left with at least 14 drums and dozens of gallons filled with fuel.

The helpless consumers, some of who slept at the filling station, suspected the soldiers were feeding the growing Lagos black market with the product.

The military officials who were fully dressed had taken over the only two pumps that dispensed the Premium Motor Spirit.

Those who protested the act were beaten and given scares on their bodies.

Meanwhile, consumers, who had spent the entire Monday at the filling station without getting the product to buy, had described the announcement by Ifeanyi Uba as a publicity stunt.

By 9pm on Monday, not more than a hundred cars left the station with fuel.

Besides the military, officials of the Nigeria Police Force and black market dealers took over the show while thousands of motorists who had crowded the place since 5am were abandoned.