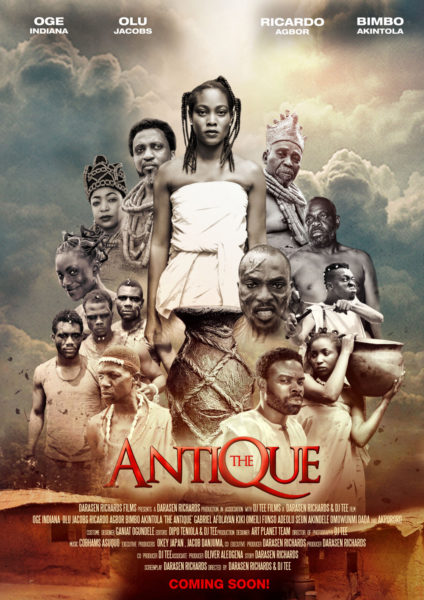 I love adventures. My favorite movies are probably “The Lord Of the Rings” trilogy which The Antique shares a very similar back story with. So when I saw what the movie was about, I was pretty excited and have looked forward to seeing the movie.

The Antique centers round the story of a young, crazy in love couple, Uyi and Uki. Uyi, played by Gabriel Afolayan, the son of a sick and dying widow who finds love in the hands and heart of the charming Uki, played by Oge Indiana, who is regarded in the village as being a cursed girl. Even though the reason for the status and stigma is never revealed. Uyi and Uki’s love is soon tested when Uki is chosen for a task to the evil forest where no man returns from. Although she resists at first, she soon accepts her fate and the task and thus the adventure begins.

I love the fact that the world is waking up to the fact that women hold a very important status in the world of today, and thus in the entertainment world, its only appropriate that women get more challenging and important roles in unexpected stories, even in Nigeria. But where my challenge lies with Nollywood is in execution. While The Antique is laid upon a good premise and foundation, it fails to build on this and such, what we have is a movie which was supposed to be filled with lots of adventures and fun moments ending up being almost a forgettable story that fails to live up to the hype which ushered the movie into our cinemas and popular online streaming site, IrokoTV.

The Antique begins with a backstory of how Spirit invaders storm into the kingdom of Godo and steal a sacred antique which has brought the town a lot of goodwill. 40 years later, the life of the only heir to the throne of Godo is on the line and the chosen warrior by the gods to embark on a task of bringing back the antique which can help restore the health of the prince is Uki. Thus begins an adventurous journey in the fellowship of 3 male warriors who will assist her on her quest.

The first thing I noticed that stood out about the movie was the score and music which was created by popular producer and musician Cobhams. The score had the feel of an adventure and is one of the best musical scores I have heard out of Nollywood this year. The visual effects were also believable and the locations chosen for scenes in the forest made me wonder how the cast and crew could spend days and nights in such a place without the fear of snakes and other wild animals. While The Antique excels in many of its technical department, it does have its pitfalls.

For a movie which was largely about an antique precious enough to have beings from the spirit world invade a human town for it, it would have made sense to have reasons established as to why the spirits felt it was so important, and a brief story about its origin and attachment to the spirits wouldn’t have been a bad idea.

Some dialogues in the movie weren’t well thought out. In a particular scene, Afolayan says to Apororo, popular comedian, “Nobody is chasing me, I am the one chasing”; to which Apororo replies, “If you are the one chasing, why are you running?” This felt latched on to the movie and even unnecessary. So did Apororo’s continued attempt at some sort of comic relief in a supposedly serious movie. His scenes were unnecessary and appalling.  They simply weren’t funny and could have saved us roughly ten minutes of unnecessary scenes.

Why did Chiefs, who are supposed to be the elders of a warrior kingdom, who probably administer the training of the warriors of their kingdom flee at the sight of their own warriors, upon calling them out? If you wanted us to give us some theatrical reveal to the “epicness” and powers of these warriors, couldn’t there have been better ways of doing this?

The Antique had scenes where I was expecting epic battles between warriors and gods but what we got were cutaways and lazy firing of darts from safe distances. It was like the cast were scared of getting in combat mode out of fear of getting injured or something. Stunts in such scenes could have made added huge production value to the movie.

The most embarrassing scene for me even as a member of the audience watching it was the scene where certain characters were trapped in a horribly executed net trap and the horrible attempt at breaking free that followed. How do three people including two well-trained warriors get trapped with both their feet on the ground and arms loosely moving round? This had horrible execution, expressions and screaming written all over it and I had to skip forward a bit.

In the end, I believe The Antique was a cameo ridden experiment which didn’t turn out as expected. I believe the team behind the movie is skilled and have the potential of making better movies in the future. For me, the movie earns a Popcorn and Water.

Have you seen the movie? What’s your take on it? Let’s know in the comment box below.

What Liposuction? Khloe Kardashian Says Her Weight Loss and Bigger Butt are Benefits of Exercising 5 Days a Week!