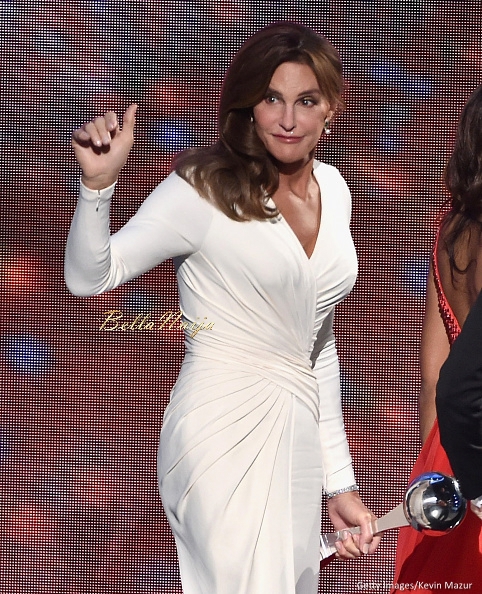 There has been so much anticipation on the International social scene as the ESPY Awards drew nearer – most especially because Caitlyn Jenner was to receive the Arthur Ashe Award for Courage at the event.

A lot of controversy trailed her receiving the award as a number of people felt there were other people more deserving. Regardless of that one thing was for sure – it was to be Caitlyn Jenner’s first appearance at an event as a transgender.

Her family came out to support her at the event including her mother, her sister and 10 of her children. 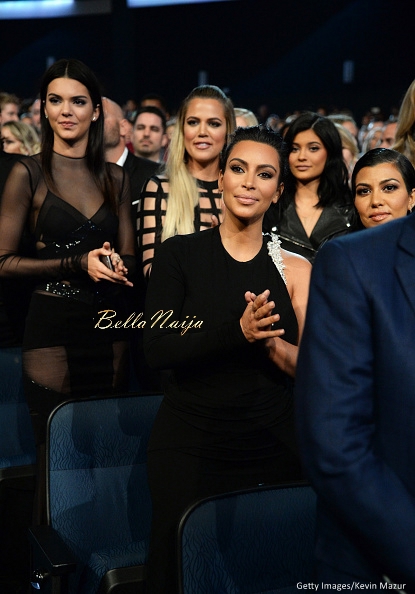 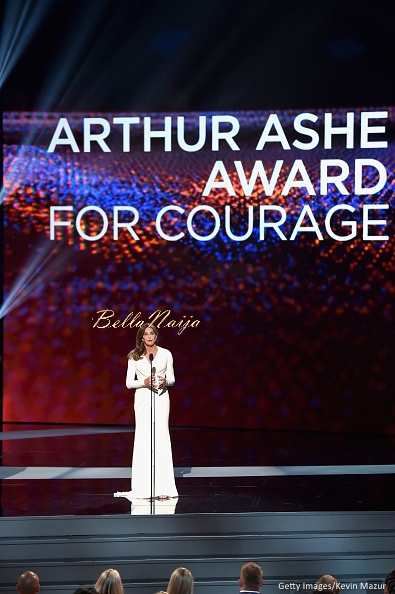 It was an emotional moment for the family. 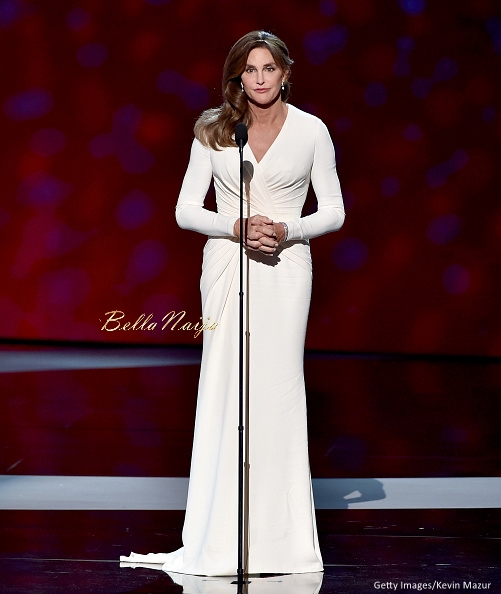 The 65-year-old accessorized with $3,485 emerald tear-drop earrings and a pair of Stuart Weitzman heels.

The gown did well to show off her feminine curves. There was a ruched bodice to wrap her torso, a plunging neckline and a side slit that showed off her long legs.

For her face, Caitlyn applied a shade of eyeshadow and black eyeliner on her lids, and looked chic with a swipe of pink lip gloss.

Versace even gave her a shout-out. 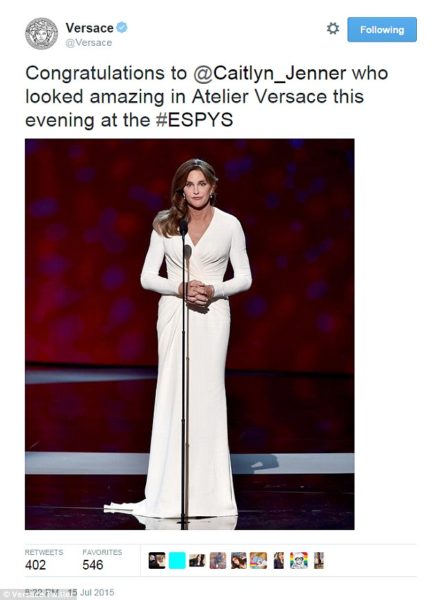 In her speech, Caitlyn Jenner highlighted the struggles trans people face. She also thanked Diane Sawyer for helping her tell her story; Caitlyn thanked her family and talked about courage.

It was a pretty long speech but nobody in the audience seemed to mind as a few people teared up. 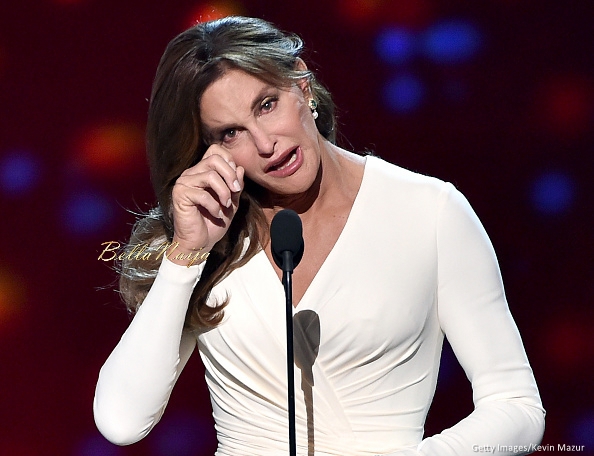 Read the speech below.

“Thank you so much. It is so wonderful to be here tonight. Now the last few months have been a whirlwind of so many different experiences and emotions. But to tell you the truth, it seems like every time I turn around in life, I’m putting myself in these high-pressured situations. Competing in the Games, raising a family. But I’ve never felt more pressured than I ever have in my life, than over the last couple of months. Picking out this outfit — O.K., girls, I get it! [Laughter.] You’ve got to get the shoes, the hair, the makeup, the whole process — it was exhausting. And next, the fashion police — please be kind on me, I’m new at this.

“Anyway, I just want to say a quick shout out to our soccer team [applause]. Ladies, you clean up very well.

“But the real truth is, before a few months ago I had never met anybody else who was trans, who was like me. I had never met a trans person, never. Now, as you just saw, I dealt with my situation on my own in private and that turned this journey into an already incredible education.

“It’s been eye-opening, inspiring, but also frightening. All across this country, right now, all across the world, at this very moment, there are young people coming to terms with being transgender. They’re learning that they are different and they are trying to figure out how to handle that, on top of every other problem that a teenager has.

“Just last month, the body of 17-year-old Mercedes Williamson, a transgender young woman of color, was found in a field in Mississippi stabbed to death. I also want to tell you about Sam Taub, a 15-year-old transgender young man from Bloomfield, Michigan. In early April, Sam took his own life. Now, Sam’s story haunts me in particular because his death came just a few days before ABC aired my interview with Diane Sawyer. Every time something like this happens, people wonder, ‘Could it have been different, if spotlighting this issue with more attention could have changed the way things happen?’ We’ll never know.

“If there is one thing I do know about my life, it is the power of the spotlight. Sometimes it gets overwhelming, but with attention comes responsibility. As a group, as athletes, how you conduct your lives, what you say, what you do, is absorbed and observed by millions of people, especially young people. I know I’m clear with my responsibility going forward, to tell my story the right way — for me, to keep learning, to do whatever I can to reshape the landscape of how trans issues are viewed, how trans people are treated. And then more broadly to promote a very simple idea: accepting people for who they are. Accepting people’s differences.

“My plea to you tonight is to join me in making this one of your issues as well. How do we start? We start with education. I was fortunate enough to meet Arthur Ashe a few times and I know how important education was to him. Learn as much as you can about another person to understand them better.

“I know the people in this room have respect for hard work, for training, for going through something difficult to achieve the outcome that you desire. I trained hard, I competed hard, and for that, people respected me.

“But this transition has been harder on me than anything I could imagine. And that’s the case for so many others besides me. For that reason alone, trans people deserve something vital. They deserve your respect. And from that respect comes a more compassionate community, a more empathetic society and a better world for all of us.

“There have been so many who have traveled this road before me. From, in sports, Renée Richards to Chaz Bono, to Laverne Cox, and many others. Janet Mock is here tonight. And I want to thank them all publicly, as well as the ESPYs, and the late Arthur Ashe, for giving me this platform to start the next phase of my journey. I also want to acknowledge all the young trans athletes who are out there — given the chance to play sports as who they really are.

“And now, as of this week, it appears that trans people will soon be serving in the military. That’s a great idea. We have come a long way. But we have a lot of work to do.

“I’d like to thank, personally, my buddy Diane Sawyer. You know, you can only tell your story the first time once, and Diane you did it so authentically and so gracefully. And me and the community are so thankful for that. And I thank you so much Diane. I’m so proud to have you as a friend.

“Here comes the tough part. I’d like to thank my family. The biggest fear in Caitlyn Jenner coming out was I never wanted to hurt anyone else, most of all my family and my kids. I always wanted my children to be so proud of their dad because of what he was able to accomplish in his life. You guys have given so much back to me, you’ve given me so much support. I’m so, so grateful to have all of you in my life. Thank you.

“And certainly last, but not least, my mother. My mom who, just a little over a week ago, had to have surgery and I didn’t think she was going to make it, but she is here with me tonight to share this night. Now, you know I always thought that I got my courage and my determination from my dad, who landed on Omaha Beach and fought all the way through World War II. But you know what I’m realizing now, Mom, I think I got all those qualities from you. I love you very much. I’m so glad you’re here to share this with me.

“You know, it is an honor to have the word courage associated with my life. But tonight another word comes to mind, and that is fortunate. I owe a lot to sports. It has shown me the world, it has given me an identity. If someone wanted to bully me, well, you know what? I was the MVP of the football team. That just wasn’t going to be a problem. And the same thing goes tonight. If you want to call me names, make jokes, doubt my intentions, go ahead, because the reality is, I can take it. But for the thousands of kids out there coming to terms with being true to who they are, they shouldn’t have to take it.

“So for the people out there wondering what this is all about — whether it’s about courage or controversy or publicity — well, I’ll tell you what it’s all about. It’s about what happens from here. It’s not just about one person, it’s about thousands of people. It’s not just about me, it’s about all of us accepting one another. We are all different. That’s not a bad thing, that’s a good thing. And while it may not be easy to get past the things you always don’t understand, I want to prove that it is absolutely possible if we only do it together.