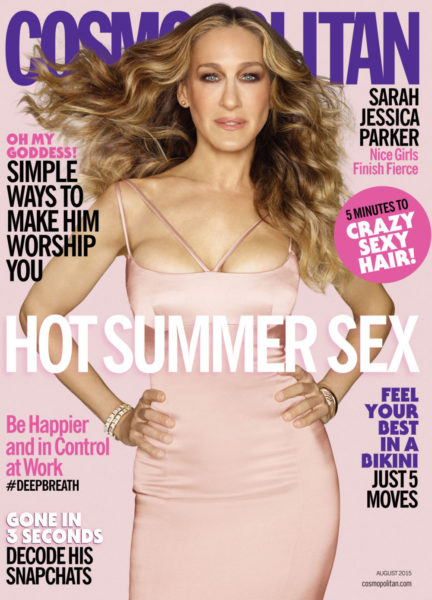 Sarah Jessica Parker is pretty in pink on the cover of Cosmopolitan‘s August 2015 issue.

Here is what the 50-year-old actress had to share with the mag:

On Sex and the City 3 and her Instagram post: “Oh my god. When I posted that picture and people were in a rage at me, I was shocked. They were convinced I had been taunting them. I’m not that clever! And to what end would I relish dangling this idea and then saying there’s no movie? I’m still finding people and being like, ‘No @BoobityBopBeep! Why would I hurt you?’ I’ve never been a mean girl.”

On being a humanist and not a feminist: “As [playwright] Wendy Wasserstein would say, I’m a humanist. I’m enormously appreciative of the work that my mother’s generation did. We are the beneficiaries of a lot of disappointment, heartache, discouragement, and misunderstanding. But I see a lot of people trying to sort out their roles. People of color, gays, lesbians, and transgenders who are carving out this space. I’m not spitting in the face or being lazy about what still needs to be done—but I don’t think it’s just women anymore. We would be so enormously powerful if it were a humanist movement.”

On what the most pressing political issues are for her: “Equality in pay. Paid sick leave. The thing that would change people’s lives maybe more than anything, assuming that we maintain access to health care, is child care. If I could guarantee every mother who is working two, three jobs that she had good child care that didn’t make her anxious all day — people would probably work in more efficient ways. How many times do you hear a wealthy person get asked, ‘How do you do it all?’ If I’m asked that question one more time … I’m like, ‘Are you kidding me? Ask someone who looks like she’s about to drop, How are you doing? How are you managing?'”

On whether she has seen any of her Met Gala look’s memes: “The one thing that I saw, which was so amazing—my son showed it to me—was my headpiece cooking Rihanna like an egg. Can I tell you something though? I never saw the headpiece as flames, I never saw it!”

For more from SJP, visit Cosmopolitan.com!

Arnold Schwarzenegger is Back in Terminator: Genisys! Get Tickets to See Him in Action on Tripican.com