Atoke's Monday Morning Banter: Keeping It Real With The In-Laws? Heck No! 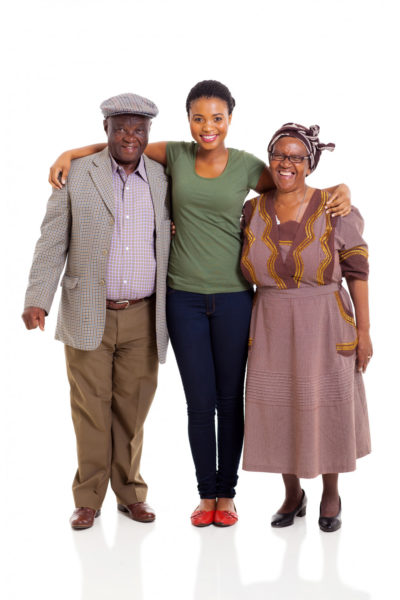 Meeting the parents of someone you love, and want to spend the rest of your life with, is extremely nerve wracking. It is such a serious thing that it is usually one of the markers that your relationship might be heading somewhere. (One of the markers… not the sure-fire sign. Some people take everybody home!) For such a serious landmark, you’re advised to put your best foot forward. Look, this is a big deal; you want the people who know and love your Lover, to get to know you and love you – almost as much. Sometimes, you don’t even want to go so far as getting them to love you, you just want to be accepted.

So, for the Nigerian guy who has dreadlocks and tattoos {yeah, remember we talked about those things being indices for social acceptance in Nigeria}, he cuts his hair and wears long sleeved t-shirts to cover his body art. Forget that his woman had cooed while grazing her fingertips along the lines of the inked shield and horses, just last night. This was a big event; he was meeting his potential in-laws.

For the woman, it’s really about showing how womanly you can be. No, honey, not all that Kama Sutra stuff you have been getting up to. This is the time where you show you came from ‘a good home’ with ‘good home training’. Putting your best foot forward with your in-laws entails showing that you will score an 8 in the 9point grading system of parental approval. In some families, you need to provide evidence that those ‘Child-bearing hips’ do more than just seduction. Insert pregnancy: show them that you’re gonna be a worthy baby factory.

My Kalabari friend, Tonye, once met her boyfriend’s dad (a staunch Yoruba man), and greeted him fully upright with “Good evening, Uncle”. Papa Boyfriend later told Boyfriend that he didn’t mind that she didn’t genuflect {We talked about the importance of that here} Papa’s biggest grouse with Tonye was the fact that she referred to him as ‘Uncle’. I gasped! Ah why didn’t you just say ‘Sir’?  or ‘Daddy’. She replied that she wouldn’t have ordinarily called him ‘Daddy’ and she felt that ‘Uncle’ was more endearing than ‘Sir’.

That relationship tanked; but we can’t really blame Uncle, Sir, Papa Boyfriend for that. Tonye said she wasn’t sure she could pretend in order to snag a man. It was a case of “This is who I am. Love me as I am. If you don’t, then take a hike and just leave me be. Someone else would love me and not mind that I call their parents ‘Uncle & Aunty’.

On a serious note, this issue cuts across race. Remember the 2001 movie ‘Meet The Parents’ featuring Ben Stiller & Robert De Niro? Ben Stiller’s character (Greg Focker) was a nurse who tried to get his girlfriend’s dad to like him – against all the condescension thrown at him by Jack (played by Robert De Niro)

I’m all for putting your best foot forward, especially as first impressions are somewhat important. But, there’s a Yoruba adage that says that “character is like smoke. You can’t hide it for very long”. Imagine you’re someone who likes food – you know, like a Grubbido, and every time your boyfriend’s family is visiting, you serve yourself FitFam sized portions. How long do you want to hide the fact that you DEY CHOP?

A few years ago, I invited a handful of my close friends to a birthday dinner. One of my friends came with her boyfriend. Dude ate, and ate and ate and ate and ate. No I’m not exaggerating! It was my first time of meeting this boyfriend of hers and all I can think of anytime I remember him is how he was stretching his hand across the table to reach for more things to eat.  This guy wasn’t bothering about putting his good foot forward oh. He was just being real.

There are some arguments against ‘being real’. According to an old Aunty of mine, in one of the sermons about how to snag a man, “You have to pretend. Ti owo e ba ti ba eeku’da, o le wa fi iwa re han” (When your hand is firmly on the hilt of the sword, then you can show your true nature). This advice has so many holes, I don’t even know where to start. You pretend, then get married under false pretences, then when you enter the marriage and the problem starts, the same Aunty will tell you to “f’ori ti”. Endure!

I believe there’s a safe balance between pretentiousness and keeping it real.  There’s something to be said for social graces and etiquette.  Don’t go to your in-law’s house and start talking like a newscaster **Side eye to Mo’ **

However, don’t pretend to be what you’re not. How long do you want to pretend that you are not a cigarette smoker? You’ll now start running around looking for TomTom to mask the smell of Benson & Hedges.

Is it really worth it?

Be true to yourself but find the right place for wisdom and tact. Don’t be too worried about who will love you and who won’t.  Not everybody will like you in this world; and calling them “Mummy Lape” – when in your head you don’t see them as more than just “Subomi” – won’t make them like you more.

Ponder upon these things, as I bid you adieu. Have a fabulous week ahead. Remember, life is short, so make yours count.

Don’t forget to share your thoughts on the times you’ve had to deal with the friends and family of your Lovers. Of course, feel free to tell us about how you had to order pounded yam to appease your Ekiti in-laws.

Oh, before I go… remember to add me on Google+ if you want to be a part of the Google Hangout for writers and people interested in writing. It’s atokeofficial+ (I think)

‘Tale Alimi: What Are You Selling?

Nicole the Fertile Chick Says Goodbye!… And Finally, You Get Your B.F.P