Nigerian Clergy Men Deported from Zimbabwe on Trumped Up Charges 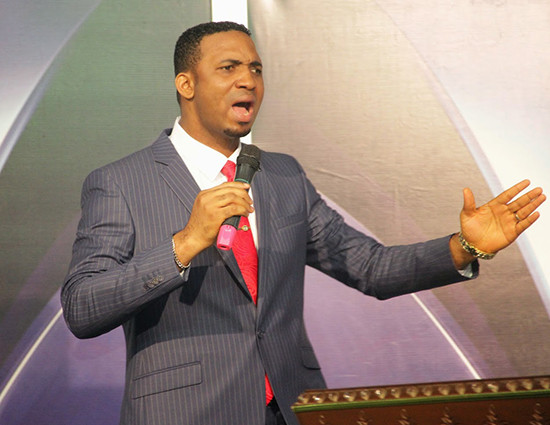 The dreaded Central Intelligence Organisation (CIO) of Zimbabwe was Tuesday accused of “abducting” two Nigerian churchmen who are in the country as an advance party for Dr. Chris Okafor (The Oracle of God). Dr. Chris Okafor is the General Overseer of one of Nigeria’s fastest growing prophetic ministries, The Liberation City Church.

Dr. Okafor had dispatched from Nigeria about seven members of his church to Zimbabwe to make preparations for his arrival for a conference convened by a Zimbabwean cleric, Pastor Joseph Billy Paul Magorimbo (of Glory to All Nations Ministries aka Fire)

Five of the Nigerians in the advance team were reportedly deported on arrival early Sunday morning but the other two who arrived on a different flight were allowed into the country following a court order obtained by Magorimbo’s lawyer, Jonathan Samkange. The authorities, late Monday reportedly took in Magorimbo and the two foreigners who had been granted entry and “questioned them for hours”. Samkange who is in Namibia confirmed through one of his aides that “state security agents had quizzed Magorimbo and the two foreigners“.

“Yes we have been told that Magorimbo and the two Nigerian Pastors went to the immigration department headquarters and were questioned until midnight yesterday” (Monday). “About nine people questioned them and accused Magorimbo of trying to smuggle into the country a Nigerian Pastor who had made a negative prophesy about the President” (Robert Mugabe), Samkange said.

“How can the Zimbabwean immigration claim that the man of God and his team were being smuggled in when indeed the Zimbabwean authorities carried out proper investigations into their trip and in fact issued them original Zimbabwean visas dated 18th September, 2015, and mailed the visas by themselves to Nigeria before the trip?” a Liberation City Church member in neighboring South Africa asked.

Samkange said he had inquired with Assistant Regional Immigration Officer in charge of Compliance and Enforcement, Francis Mabika as to what the problem was. “He told me it was not him and he had no say as to what was happening“.

Dr. Okafor, leader of the Liberation City’s Chris Okafor World Outreach Ministries has, according to Samkange, cancelled the trip following the threats and clear indications he may not be allowed into the country. According to media reports, High Court Judge, November Mtshiya early Sunday granted Magorimbo and the two Nigerians a provisional order allowing them unfettered entry into the country but immigration authorities reportedly declared they would defy the order, according to a senior immigration official, Francis Mabika. 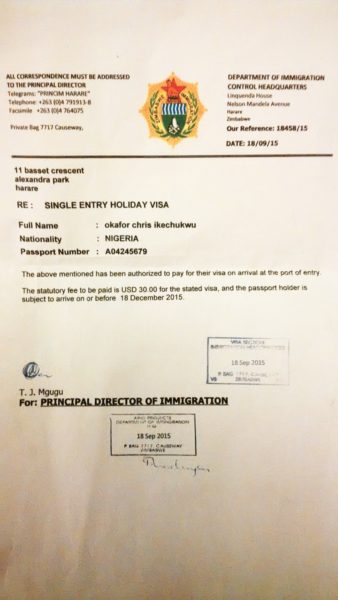 Samkange on Tuesday accused Mabika of being in contempt of court. “The High Court granted an order in Mabika’s presence and he is now defying a lawful order of the courts. It is called contempt“, the Zanu PF legislator said. Samkange said Justice Mtshiya, “even remarked that the department of immigration was soiling the country’s reputation“.

Part of Mtshiya’s provisional order issued in the early hours of yesterday read: “Respondent (chief immigration officer) is interdicted from interfering with the applicant’s stay in the country until October 10.” Mtshiya challenged the State to “show cause why a final order should not be granted”.

It could not be established what prophesy Okafor had made that could have angered authorities. The Man of God had earlier given a precautionary prophecy regarding Mugabe’s death, if he (Mugabe) didn’t put his house in order. African “prophets” have at one time or another made predictions relating to Mugabe’s death or departure from power. Some wonder why Okafor’s prophecy would be treated with such aggression. But most Zimbabweans deny it has anything to do with a prophecy from the Man of God. They are strongly of the opinion that some popular local church leaders in Zimbabwe had engineered the move to fend off competition for the “spiritual space” currently occupied by Prophets Emmanuel Makandiwa and Walter Magaya. They claim that these men of God, especially Walter Magaya have in the past frustrated other influential men of God from entering into Zimbabwe, in a desperate bid, as some of them put it, “to protect and preserve their business interests”.

“Our understanding is that there are certain so-called men of God in Zimbabwe and religious leaders calling themselves prophets who are working in cahoots with their political connections to block foreign preachers from coming. It is a clear religious war that has been turned into a political game-show” an irate Samkange said.

Dr. Chris Okafor has been in the news a lot lately for his unrivalled prophetic accuracy and unequalled humanitarian overtures. Dr. Okafor is about the first prophet in Africa to receive the Accurate Seer Award. According to one Botswana follower of Dr. Okafor, “I have been to so many places and this is the first time in my life that I have seen a prophet who will not only prophecy to you – because even witches and psychics can see stuff, but he gives you solution. That’s why he is different from others and trust me, very soon, he will take over Africa“.

Dr. Okafor whose strange birth was prophesied to his parents by one Prophet Basil, has been on a constant tour around the world to win one billion souls for Christ through his Chris Okafor World Outreach Ministries (COWOM). The man of God has also empowered thousands of artisans through his Chris Okafor Humanity Foundation. He literally spends hundreds of thousands of dollars monthly to empower widows and the less privileged, winning hearts and minds across board. According to the man of God, “Ministry for me is empty without social responsibility. We must help the poor in our midst. Otherwise, we are just chasing shadows. This is what I was born for“.