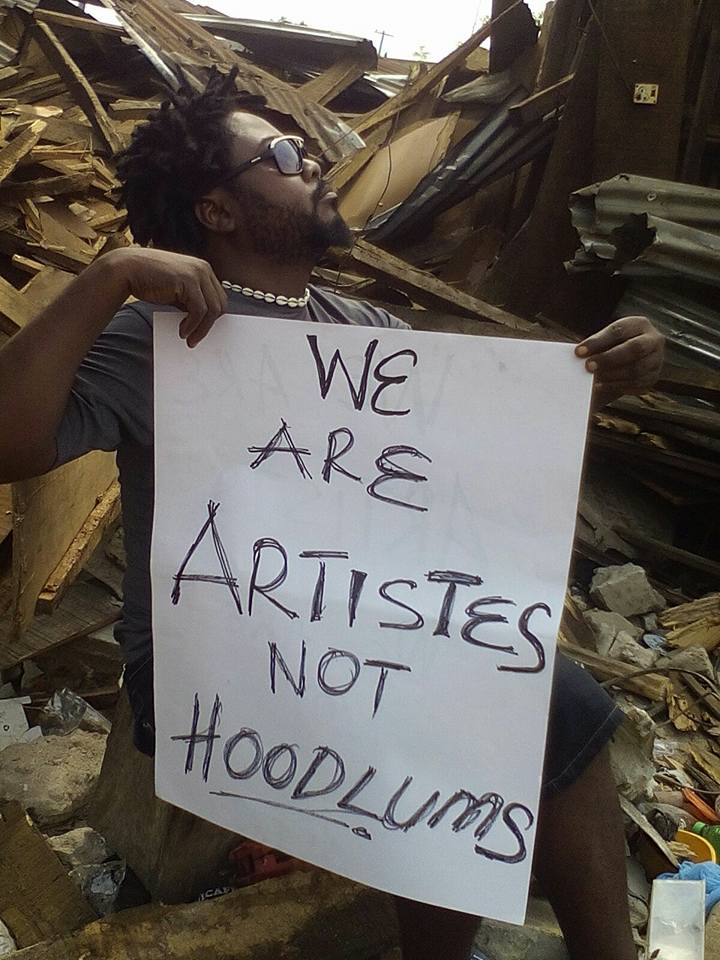 The government’s position is that the Village had become a hive for illegal and illicit activities. The artists on the other side dispute that accusation and claim the government has less than pure motives for their actions including possible commercial use of the space versus the current free art space. 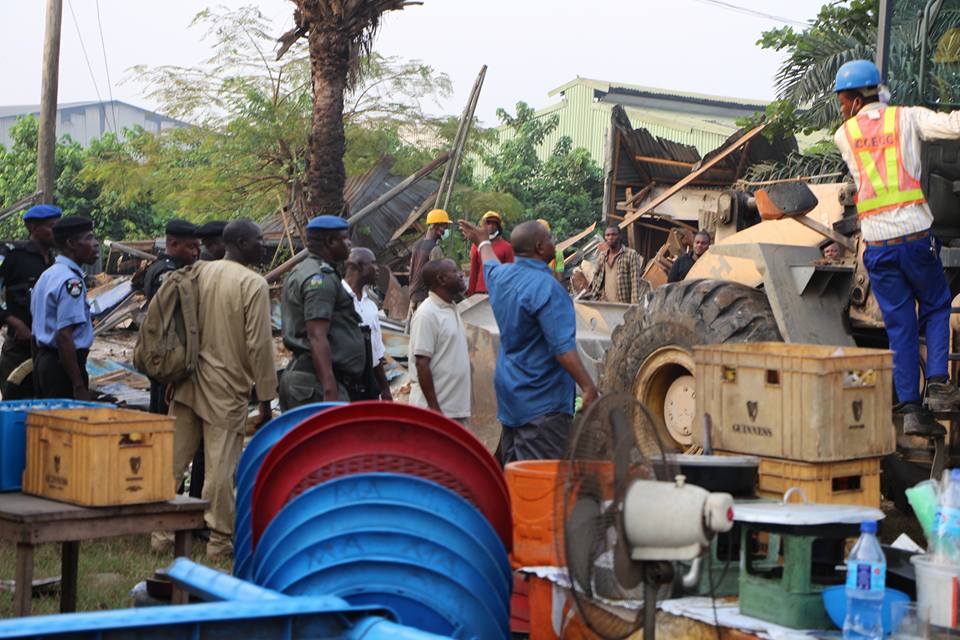 Let it be on record before the battle begins, that the DG (Kabiru Yusuf) of the National Arts Theatre has become a complete nuisance to the Artists community. And since he is a representative of the Federal Government, his recent action further tells us that this present government is bent on completely destroying the arts and creative expressions.

As we were rejoicing with Jelili Atiku on his release from Kirikiri, the Artistes village, which is annexed to the national theatre witnessed a demolition in the early hours of yesterday, Saturday 23rd January 2016. The space, which can be readily considered as the only space that still brews creativity within the entire structure of the national theatre, whose glory is constantly sinking into the muddy grounds surrounding it.

Eyewitnesses reported that the DG in company of a battalion of fully armed policemen, including the DPO came to the artists village with bulldozers at about 5am yesterday and started demolishing workshops and structures that housed veteran actors, painters, sculptors, drums etc. without prior notice of demolition. 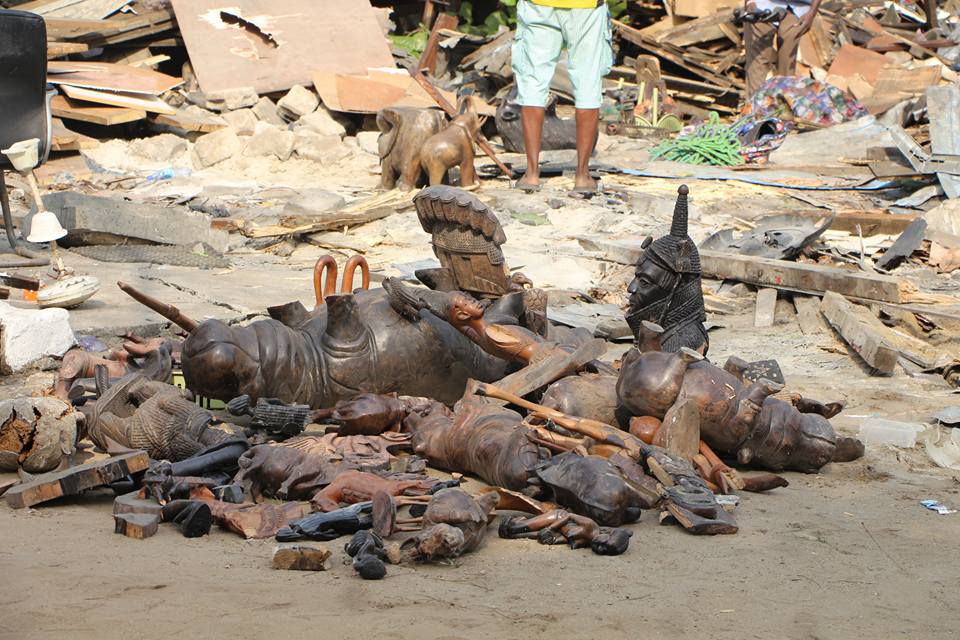 As if this wasn’t bad enough, the DG ordered that anyone pleading or reacting to this move should be shot. Presently some artistes are receiving treatment at the hospital.
In fear of the reaction of the angry youths at the village, the DG brought out a pistol, shot in the air, and once again ordered the police to continue shooting before running away from the scene.
The ugly incidence have rendered a lot of the artistes mentally homeless and destroyed their priceless intellectual properties. 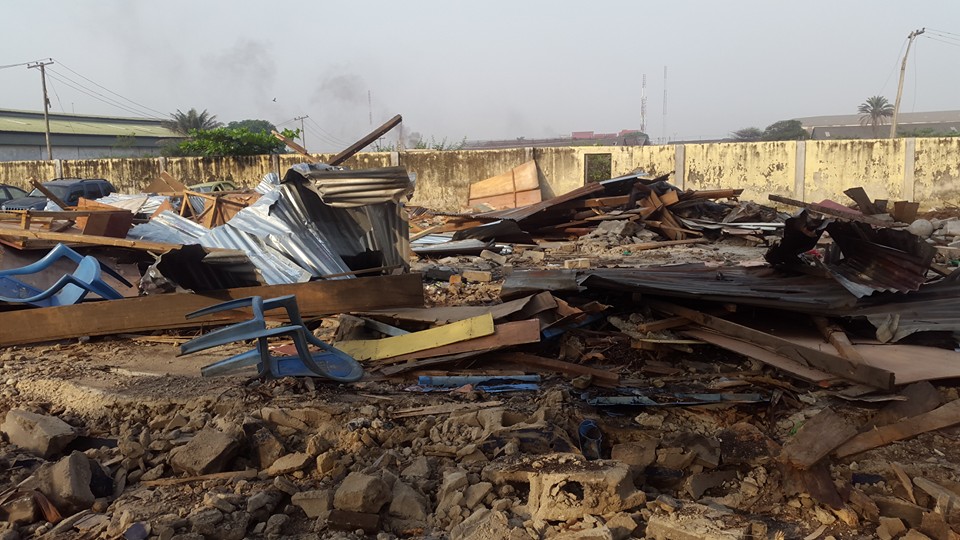 This is another call to action for the general public, the symbolism of constant menace to the artists in our society, should make us all worry at the level of inconsideration that is yet to hit many of us within the larger society. In the name of advancement, cruelty is becoming the proposed weapon here. I am highly worried because obviously this is an order coming from the minister Lai Muhammed who visited the edifice few weeks ago.

I, like many others began our careers in this village, this is a very sad news because we still got our memories imbued in those demolished edifices, and the destruction of that space may lead to trauma and a creative discontent which the state is not willing to go into with its creative citizens.

This madness is becoming a norm, and as you know, when some shy lucks are given power, they misuse it and become tyrants to the society. This is the case of the DG of the national theatre. He has called for a battle and he will get it beyond his wildest imagination.

Art is a profession and not a hobby I insist. Artists should be respected just as other professionals I insist. It’s time to speak truth directly to power.

The artists have also scheduled an open meeting this week at the Freedom Park in Lagos.

Related Topics:National Theatre
Up Next