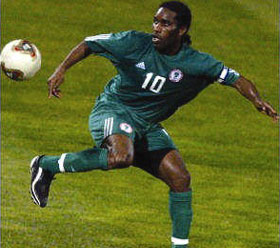 Okocha in his Super Eagles Heyday

The home-based Eagles crashed out of the championship in Rwanda on Tuesday, after finishing third in Group C after a lone goal defeat by Guinea in last group match.

“For Sunday Oliseh, he is my friend, he is my colleague; I think he has got all it takes to get us back on track.

We don’t need to use the CHAN to judge him, we just need to encourage him, support him and let him do his thing.

Hopefully, he is the right person to take us to where we want to be.’’

Buhari in Kenya: We Must Act with Greater Vigour against Radicalization & Extremist Ideologies