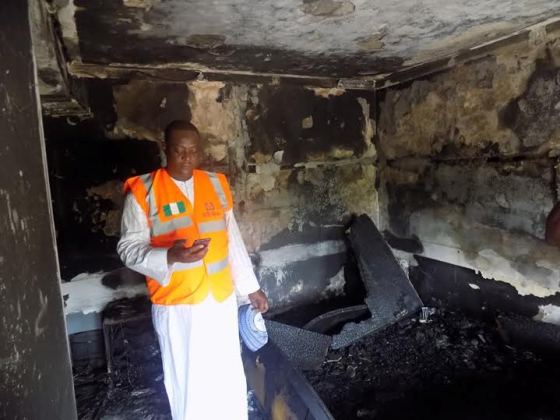 The National Emergency Management Agency (NEMA)  has confirmed a former Auditor General of Borno State, Abbah Kyariin dead in a fire outbreak that gutted a section of the University of Lagos Guest House in the early hours of today, Thursday 3rd March, 2016 in Lagos.

The victim of the unfavorable incident died of suffocation. He was said to be in the Shehu of Borno’s entourage attending the 2014/2015 convocation of the institution.

The Shehu of Borno, Abubakar Umar Garba El-Kanemi is the newly installed Chancellor of the Institution.

The spokesman for the National Emergency Management Agency (NEMA), Ibrahim Farinloye, confirmed the incident through a text message sent to NAN.

“The deceased will be flown to Maiduguri for burial today,’’ the text message read in part.

Efforts to speak with officials of the university, about the incident yielded no result as everyone claimed to be busy with the convocation events and could not talk to the press.