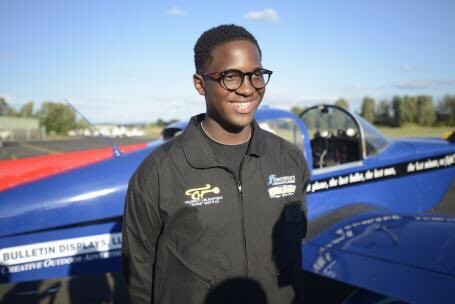 Isaiah Cooper, a 16 year old male from Compton, Southern California has just made history after completing a record-breaking flight across the United States of America.

He has just been recognized as the youngest black pilot to fly cross-country after he completed an 8,000 mile flight and a two week trip across the continent.

The young boy had a few unavoidable challenges due to poor weather conditions during his landing, but has now set a remarkable record that has encouraged him to set a new goal of wanting to become the youngest pilot in the world.

“He was able to execute the emergency procedures flawlessly, got it on the road, landed, didn’t damage the houses, the schools, the construction crew, nothing. I mean, he got out of that thing safely.”

“I began attending an aviation youth program in Compton at Tomorrow’s Aeronautical Museum (TAM) when I was 5 years old. But as I got older, I began hanging with the wrong crowd, doing seriously self destructive things,” he admitted that he had realized “that this was not how I wanted to live my life, I returned to TAM. My main goal is to become a productive young man with a future in aviation, and not a statistic.”

We can only look forward to hearing more awesome things about this young and talented African American and hope this inspires more to achieve big.