The End of a Tech Era: Verizon Acquires Yahoo Core Business for $5 Billion 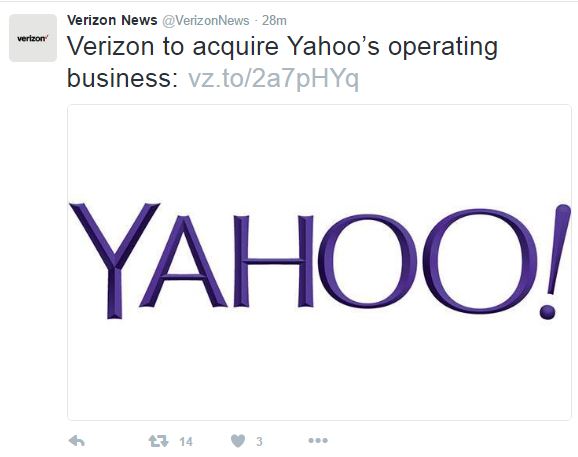 Yahoo was once regarded as the “King of the Internet”, worth $125 billion in its time the way Facebook or Google are today. Now it’s being sold to Verizon for comparatively chump change.

This morning, Verizon announced the end of the long process of acquiring Yahoo’s core business for just under $4.8 billion. This transaction ends the independence of one of Silicon Valley’s most iconic pioneering companies. Yahoo’s seventh and final CEO, Marissa Mayer, will reportedly depart with severance pay worth more than $50 million.

The sale will unite Yahoo with AOL, the first web portal Verizon bought last year for $4.4 billion. The United States’ largest wireless provider is betting nearly $10 billion that combining the two formerly dominant websites will give it an edge in mobile content and advertising technology it can leverage across its more than 140 million subscribers.

“We have enormous respect for what Yahoo has accomplished: this transaction is about unleashing Yahoo’s full potential, building upon our collective synergies, and strengthening and accelerating that growth. Combining Verizon, AOL and Yahoo will create a new powerful competitive rival in mobile media, and an open, scaled alternative offering for advertisers and publishers.”

Yahoo began in 1994 as “Jerry’s Guide to the World Wide Web” a list of websites curated by Stanford University students Jerry Yang and David Filo. It grew quickly as millions of Americans began turning on dial-up Internet connections and needed a home page that would direct them to all their essential destinations. In 1996 it went public and rode the dot-com bubble to epic heights, reaching a peak of $500 a share (or $125 a share in today’s post-split calculations) in January 2000.

Syrian Asylum Seeker Blows Himself Up Outside Music Festival in Germany