Aisha Buhari on Her Mission in U.S, Funds for her Trip, and Why she Sued Fayose

Arese Ugwu discusses Pitching to Brands in Episode 4 of "African Ambition: The Road to #TSMWSeries"

Tomike Adeoye's Baby Girl is Two Months Old! Her Get-Together Vlog has all the Scoop 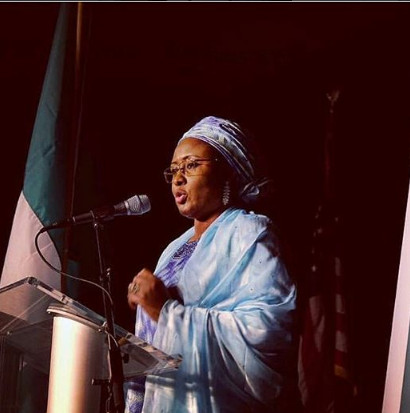 Nigeria’s first lady, Aisha Buhari, in an interview with the Hausa service of the Voice of America (VOA), has said she is in the United States of America to hold discussions with aid organizations on how to help the women and children facing starvation in the North-Eastern part of Nigeria, PREMIUM TIMES reports.

“Our children in the various camps are in dire situation and the government alone cannot do it, we have to get help,” she said.

She said that she was at the United States Institute of Peace (USIP) to set up a plant in Nigeria for production of aid packages containing nut-related supplements. She said that the packages are produced in Nigeria and it will be good to have a plant in the country.

She said that the United Nations Children’s Fund (UNICEF) had been shipping the packages to Nigeria. “It often takes between 6-8 weeks for these things to be shipped to Nigeria, before they arrive, many children would have died, so I suggested to them (USIP) to set up the manufacturing plant in the country if they really want to help is,” she added.

On her lawsuit against Governor Fayose of Ekiti state, she said she instituted legal action against the governor because he has been insulting her and her family, and raising false allegations against her.

“At the time, he was not the only one insulting us, but people felt that it was just campaign. After the election, which we won and they lost, everyone else moved on except him and he extended his insults to me.

I did not run for president. I am a married woman and I have never called his name. I never knew him. But as governor and chief executive, he kept insulting and raising false allegations against me, I have to respond and I decided to go to court.

He made allegations over what he said I did here in the US, even though I have never met the people he mentioned,” she said

On funding for the trip, PREMIUM TIMES reports that Aisha Buhari said that personal funds and sponsorship grants were used. “We sponsored even the government officials that came with us on this trip,” she said.

“All that we (First Ladies) are doing is to help our husbands. For instance someone can decide to give me Indomie or Maggie, which he cannot give to the president, women need these things.

In any state where a governor’s wife is irrelevant such as Yobe, you will notice that the women are suffering. Whenever we get such gifts, we don’t keep them but share to those in need,” she added

The first lady also had a roundtable discussion with Project CURE, the world’s largest distributors of medical donations to developing countries.

Watch the documentary on her visit by TVC below: