EXCLUSIVE: "It's sorted out"! Nigeria's Wellington Jighere Set to Defend His Title as World Scrabble Champion after Visa Issues

#BNShareYourHustle: Magic Box Nigeria is Here to Curate Bespoke Gifts For You & Yours 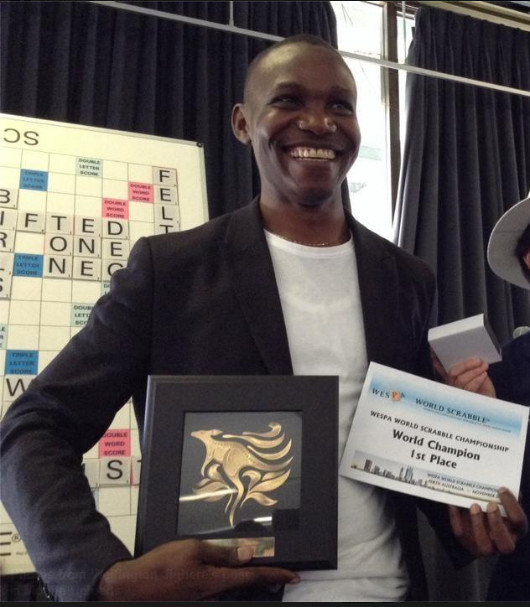 Wellington Jighere after he won the Championship in 2015

All things being equal, the World Scrabble Champion, Wellington Jighere will depart Nigeria for France before the competition begins on Wednesday, August 31st at the Grand Palais, Lille.

Following the news that he and his team were denied visas from the French Embassy in Nigeria, BN contacted Jighere to find out what happened.

On Why they were Denied Visa

Wellington said, “it’s sorted out. They’ve contacted us that the visas will be ready by Monday,” he added.

Intervention of Mind Sports International (MSI) – Organisers of the Competition

He said that they intervened. In fact, their intervention is making it possible for him  to get to France.

On the Possibility of making it for the competition

Wellington lamented the fact that there were no sponsorship, as at the time of our conversation. “We are only hoping for the best between now and then,” he said.

On Whether the Government intervened

“The Government has not done anything yet. We’ve been seeking for sponsorship from the private sector”.

However, there were reports that the visas were denied because Jighere and his team “did not show enough reason to be in France for the Championship”.

A comment by Sulaiman Garba Gora, who was in one of the photos in Jighere’s post, read:

Elie the unfortunate part of all this is the reason adduced for the Visa refusal, which is that the applicant did not show enough reason to be in France for the Championship. I had as far back as May when we applied spoke with officials of the French Embassy who assured me. Only one senior player had his visa approved with the same documents.
Visa normally takes 10 days but this took six weeks only to be denied when it is impossible to appeal.
Host need to do something

Reacting to the sad tale, the Tournament Director for this year’s championship, Ganesh Asirvatham, (before BN contacted Jighere), said:

Just to clarify, MSI in conjunction with the French Federation provided the necessary supporting document to ensure that the visa application process would be smooth and trouble free. Even now, officials from the French Federation are making last minute appeals to French embassy in Nigeria.

As you know the Embassy has complete prerogative in visa issuance and they have chosen to exercise that discretion. Rest assured that we are at MSI are devastated by this turn of events.

The participation of the Nigerian contingent is crucial to the success of this event. The strength and depth that the team possess is unmatched and certainly diminishes the playing field. We’re still hoping that our last minute intervention will bear fruit. Please don’t give up yet my fellow brethren.

We hope Jighere gets the opportunity to defend his title.