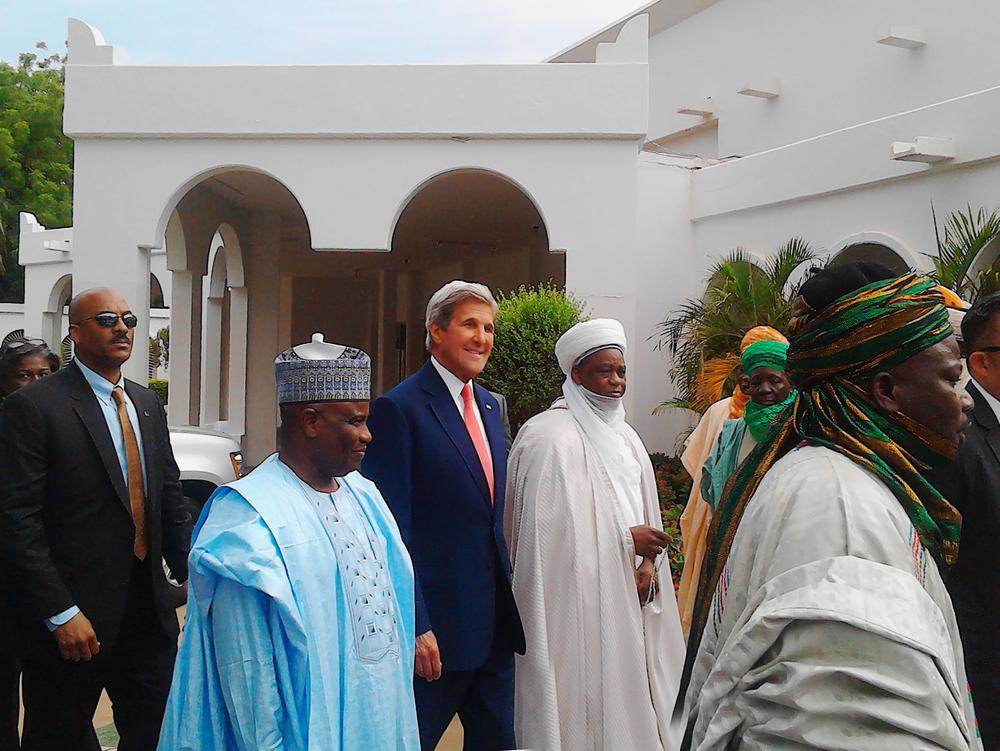 FROM LEFT: GOV. AMINU TAMBUWAL OF SOKOTO STATE; THE U.S. SECRETARY OF STATE, MR JOHN KERRY; AND THE SULTAN OF SOKOTO, ALHAJI SA’AD ABUBAKAR III , DURING KERRYS ARRIVAL ON A COURTESY VISIT TO THE SULTAN’S PALACE IN SOKOTO ON TUESDAY(23/8/16). 5898/23/8/2016/ BRM/BJO/NAN

The United States’ Secretary of State, John Kerry, is currently in Nigeria.

On Tuesday, he visited the palace of the Sultan of Sokoto, Alhaji Sa’ad Abubakar where he lauded the efforts of the Sultan in promoting religious tolerance and understanding among Nigerians.

He said that the Sultanate Council was building a community of tolerance for peace, progress and political stability in Nigeria.

He said that the United States would continue to identify itself with the Sultanate in strengthening religious tolerance and understanding among Nigerians.

He said that being the first secretary of state to visit the seat of the caliphate, all hands should be on deck towards strengthening religious knowledge among Nigerians.

Sultan Sa’ad Abubakar had earlier expressed delight at the visit.

He said that the council would continue to promote peaceful coexistence among Nigerians for the overall political growth of the country.

He explained that religious tolerance and understanding among Nigerians remained the principal objective of the Sultanate in mobilising Nigerians to tolerate one another for peace, progress and political stability of the country .

Governor Aminu Tambuwal, who accompanied Kerry to the palace, said the state government would continued to strengthen peaceful coexistence among the people, irrespective of religious, tribal and political differences.

“We don’t discriminate on religious, tribal, ethnic or political affiliations, as we accommodate all for peace and harmony,” he said.

Kerry had a closed door meeting with Sultan Sa’ad Abubakar and some leaders of the two major religions.

Governor Abdulaziz Yari of Zamfara and Inuwa Abdulkadir, Deputy National Chairman of APC North West, were present during the courtesy visit on the Sultan.