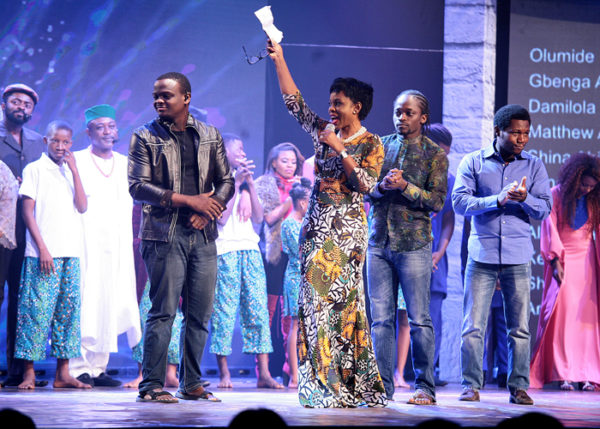 I was elated when I found out that the first Nigerian-produced musical was going to be performing in London’s West End. I hadn’t seen one before, so I was both excited and sceptical. Will it be any good? Will they be professional? Will I be able to commend it to my non-Nigerian friends? How will it compare to the other plays I’d seen in theatre before? Yes – I had many questions, but that did not stop me from purchasing my ticket, and taking 2 friends along to the Saturday afternoon viewing.

Two minutes into the play, my scepticism dissipated as I relaxed to enjoy the unfolding of an engaging, entertaining and inspiring performance, about the fate of a group of young graduates navigating their paths in life. Whilst the play conveys an impressive message about the power of the Nigerian youth, I was particularly captivated by the implicit messages of hope, survival and love as follows.

A Message of Hope
Ask someone to describe a Nigerian, and you will hear words like ‘hustler’, ‘educated’, ‘funny’, ‘419’, ‘hardworking’, ‘Yoruba demon’, ‘deluded’, etc. Amongst these selection of descriptions, I say we are a hopeful people, striving and surviving daily against numerous odds that are stacked against us, both home and abroad. When Divine Oduduru made the declaration that he was ready to ‘die on the finish line’ in his viral speech at the 2013 IAAF World Youth Championship, no doubt he was echoing the attitude of millions of Nigerian youths, who relentlessly pursue their dreams, hoping for success and a ‘better tomorrow’.

As the play unfolded, a message of hope resonated strongly in my heart. Hope for the progress of Nigeria and its citizens was made alive in the character of Tosan, who represented a young educated Nigerian, with clarity of vision and integrity, willing to boldly reject and renounce the corrupt practices of his boss, the fraudulent Governor who was also his uncle. In that moment when Tosan made a choice to appropriately challenge the leadership of the Governor, and embraced the opportunity to contest against him at the next election, I witnessed a paradigm shift which tickled my imagination.

Imagine all the possibilities, when Nigerian youths can actively negotiate their future, and engage with politics from a position of strength and competency. Imagine a day when Nigeria and all its ‘political gladiators’ respect the fundamental values that  patriotic, competent, honest and progressive Nigerian youths can contribute to the development of the country. Tosan exemplified millions of Nigerian youths who are educated, and equipped with innovative ideas, ready to serve the country and trigger a positive revolution.

When the play culminated in Tosan being elected as Governor, my hope was renewed for a democratic dispensation, whereby youths can conceive and achieve. Perhaps, if we all make individual choices to light a candle rather than curse the darkness, we might experience the breaking of a new dawn sooner than we expect.

A Message of Survival
The old and tired joke is that ‘Nigerians are everywhere’. You might even find one in Siberia, trying to sell ice to an Eskimo – yes the hustle is real!  Whilst I cannot deny the comparative benefits of working, living and studying in many western countries, it is a sad reality that due to the non pragmatical issues in Nigerian, a large majority continues to nurture dreams of travelling abroad at all costs – even if it means skilled men being under-employed and engaging in all sorts of menial jobs.

This was the case of the happy-go-lucky and self-conceited character named Rex, who after graduating with a degree in medicine, longed to travel to London for life on the big stage as a dancer. Ignoring the voices of reason and discerning questions of his friends, he was soon caught in his own web of deception. In London, he discovered that there were many shades of green, as his dream of life on the big stage was reluctantly exchanged for life as a security man, and eventually got deported after a tiff with his European social media lover.

No doubt, Rex’s story reflects that of many Nigerians abroad. Stories of broken dreams, delayed expectations, unexpected hurdles, endless sacrifices and desperate measures to ensure they find the green pasture they left Nigeria for. Yet, in the midst of the struggle, many have excelled and are being recognised for their positive contributions to whatever society they’ve found themselves in, thereby, paving the way for others behind them to aspire and achieve. There is no shame in telling our story of struggle, strive and survival.

A Message of Love
Wakaa also tells a story of love. Romantic love between Tosan and his over-indulged sweetheart -Kike, a love for the rich and vibrant cultures in Nigeria, which found expression through the music, dance and costumes. Beyond these, I detected a message of love through Tosan’s unpopular decision to relinquish all the greedy trappings and trimmings of politics as we know in Nigeria, to focus on his dreams of making the country a better place for the ordinary man.

In a climate where we experience too often, men and women who solicit the votes of the people for prominent leadership position, promising to bring the long awaited change, soon sacrificing their integrity on the altar of greed, self-gratification and indifference. It is important that we celebrate a narrative which advances a new reality in the political realm. A realm whereby we have politicians who are motivated by genuine love and respect for citizens, politics couched in honest values, sustainable principles and excellency.

A politics of love rather than selfishness. The type of love that is responsive to the pains and perpetual sufferings of the citizens. Politics which involves not just rhetorical ‘higi-haga’, but translates to constructive policies and implementations of structures that will be of great benefits to all Nigerians

Overall, the performance was commendable, and the cast did a fantastic job of telling our stories in a compelling and engaging manner, to an unsuspecting audience on an international platform.

BN Prose: You Are There by Feyisayo Anjorin

When I’m not negotiating contracts from 9-5, I’m daydreaming about my next travel adventure, working on my podcast which will be launched in Jan 2018 and writing my first book. I love reading, teaching my Sunday school kids and spending time with friends - indulging in good food and conversation. I am passionate about young people having access to good education and currently serve as a School Governor in my local authority. I’m currently seeking opportunities to work with corporate and government organisations in Nigeria on social development, especially education. For now, you can contact me at [email protected]