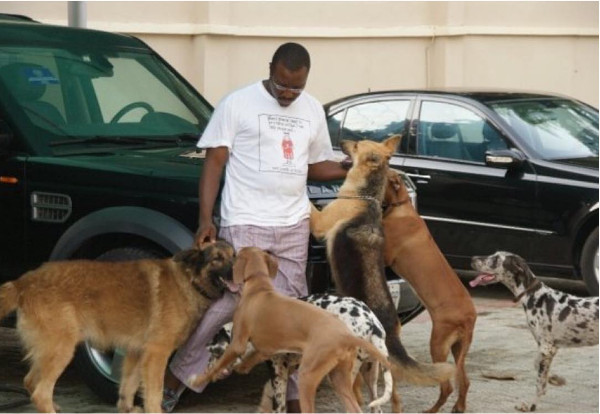 Following, the arrest, re-arrest and prosecution of a man, Joe Chinakwe, who named his dog “Buhari”, comedian, Ali Baba has shared a story about his dogs he named: OBJ (Obasanjo), Obama, Thatcher, Abacha, IBB (Babangida), Gaddafi, Clinton, Madiba (Nelson Mandela), among others.

“But then again, OBJ had a different kind of personality and a high sense of humor. Everyone can not be the same. So I understand. And that is all I have to say,” Ali Baba said.

My dogs and I back in the day. Must have had like 12 at a particular point in time. Interesting time. That time I mean. I had traveled and returned at night, but was too tired to relate with them. OBJ, the big Alsatian was the head of the pack. Then Obama was the big black and white Great Dane, the Alsatian on the bummer was Thatcher. Thatcher must have given me like 18 puppies… In her good days (X120k per puppy) the ridge back by Thatcher was called Madiba… It arrived from South Africa on the birthday of Mandela… The Second Harlequin Great Dane was named after Queen Amina… But the fiercest of my odds were Chaka, IBB AND Abacha. They took no prisoners. In fact, if I gave you anything I had used before, like shoes or clothes,my advice is not to wear them to my home. Because if Chaka, or Abacha caught a whiff of that item on you… You will not like yourself.

They were my trusted securities and my friend. One time in LEKKI, 1997 or so, a guy scaled the fence into my compound in the night. I was woken up to a shouts of “Oga come o!!!!!” “Oga I am finished!” And Usman my guard was having a good laugh. At 2am! The petty thief was on the roof of my V-Boot. I was more scared for his life than he was of it. Because then we had Chaka, Gaddafi and Clinton. Those who new these dogs will testify to their brutality. Go ask @basorge_tariah and @officialbunmidavies…

But with hindsight now, I am just thanking God. Yes oooo! I have to thank God ooo. That it was not now, that I named my dogs after any sitting president and foreign leaders. In fact, Obasanjo himself was very impressed years later when his friend that brought me a gift from Baba, told him how a dog called OBJ in Ali Baba’s house nearly killed him.

Baba used to warn my wife then, that if she ever decided to have a dog meal, she should not touch OBJ… But then again, OBJ had a different kind of personality and a high sense of humor. Everyone can not be the same. So I understand. And that is all I have to say.

Ali Baba, in his next post also called on the President to call the Inspector-General of Police (IGP) and the Attorney-General of the Federation (AGF) to order, adding that the Fulani herdsmen menace, and other issues bedevilling the country have not gotten such swift attention.

Meanwhile, Vanguard reports that Joe’s family, as at 3:30PM on Thursday had not yet perfected the bail conditions for his release from prison.

Family sources that spoke with Vanguard on phone, said they were able to raise only N20, 000, but could not complete the money.

A family source said they made passionate appeals to the authorities to accept what they had and release the trader. However, it was not clear if their appeals had been accepted but sources said the authorities were still profiling two of his guarantors as at 3.30pm yesterday.

Is Modeling Richard Mofe-Damijo’s Next Big Thing? He’s thinking about it!

15 Deaths Recorded after Attack on American University of Afghanistan