A Night of Warm Cheese & Loads of Laughter! Atoke Recounts Everything That Happened at the World Premiere of The Wedding Party at #TIFF16 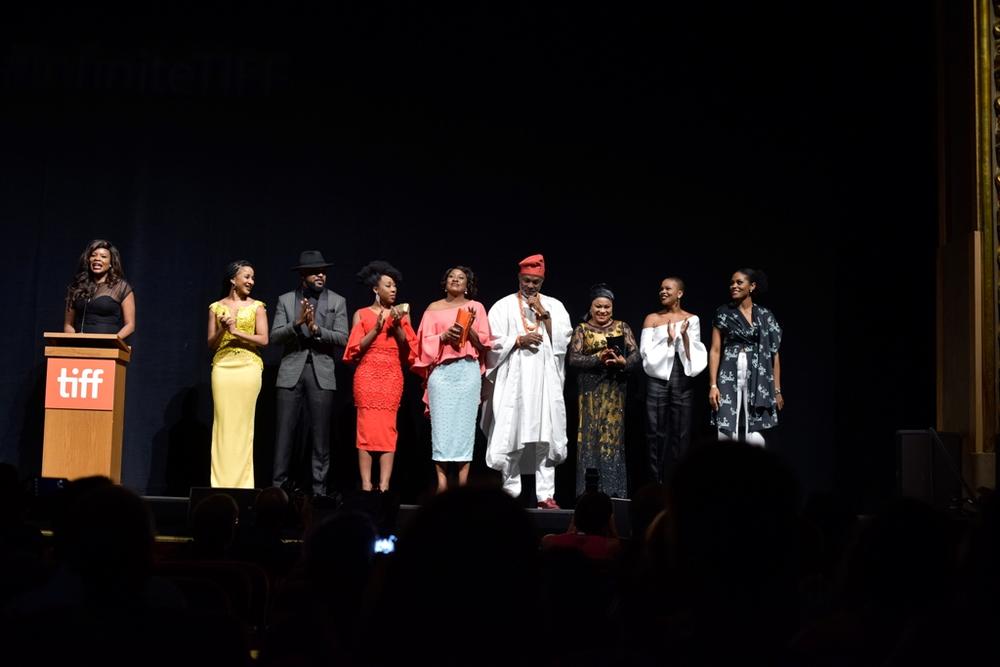 We had watched the trailer for The Wedding Party and the anticipation was at a fever pitch. Everywhere I went, people were talking about how much they looked forward to seeing Kemi Adetiba’s first feature length film.

Nigerians in Nigeria grumbled in complaint about the December release date; but for those of us in Toronto, we knew that we only had to wait till the 8th of September to see it.
The Wedding Party was selected as one of the eight Nigerian films spotlighted under the City to City program at the 41st Toronto International Film Festival. So, last Thursday, I watched with beaming pride as the line of people snaked along the wall of the Elgin Theatre, down Yonge street. In about an hour, there were approximately two hundred people on the street, waiting to be let in.
It was a mixed crowd of diverse races, but mostly Nigerian. Ah! My people showed up for Kemi Adetiba… Happy isn’t quite the word that explains how I felt. It was a warm and pleasant feeling, running from my heart all the way to the tip of my fingers. Pride. That’s it. I was PROUD!

You see, Kemi Adetiba stands out as one of those directors whose work you can rest well assured of its quality. From Bez, to Olamide, to Ego and even Banky W (who was the lead actor in her debut) – with every music video Kemi shot, I had an increased yearning for her the stories she chose and the cinematic quality she brought with it.
Kemi had yet to disappoint with any of the music videos; Lord, let her not ‘fall hand’ with this movie. I mused as the crowds pushed through the now opened gates. The Red Carpet appearance was done and it was time for us to go see this highly anticipated movie.

We settled in, air kisses flying around – “Long Time no see. So you dey this Toronto?” and not long after, the lights were turned off. Cameron Bailey, the Artistic Director of TIFF stepped on stage. He talked about his work with TIFF and how Tunde Kelani’s Abeni and Biyi Bandele’s Half of a Yellow Sun had been screened at the festival in previous years. However, with the buzz being created by Nollywood movies and the volume of interest in Nigerian films, it became imperative that TIFF jumped on the hype!

So, he talked to British-Nigerian actor David Oyelowo and together, they agreed that it was indeed a step in the right direction. Cameron Bailey then announced that David Oyelowo was coming on stage.
The next 10 minutes had the audience in stitches as David Oyelowo clearly went Nigerian on us. His exuberance and excitement filled the room. He did this hilarious dance where he shook his tushie and I’m not sure I can ever get that image out my head.

David Oyetokunbo Oyelowo reminded us about the true spirit of Nigeria and you could feel the pride and honour hovering in the room. There we were, thousands of miles away from our homeland, reminded that in spite of all our challenges and difficulties as a nation, we are still a force to be reckoned with. Voices around the room chattered about how in that moment, their longing for home was doused. The feeling of being at home, at peace – with people who knew how to say their name right – intonation and all. Everything about the atmosphere of Lagos being in Toronto, in that moment, was simply glorious.
Subsequently, the Lagos State commissioner of information and strategy was invited on stage. Steve Ayorinde, introduced by Cameron Bailey as a savvy journalist and avid film critic, did not bore us with monotonous governmental rhetoric. Still, the clock was ticking and it was getting late… can we get on with the movie?

Kemi Adetiba was then invited to the stage. She was escorted in by my Boo, Bankole Wellington. It was, after all, her big night. In a form fitting black dress, the director cracked a few jokes to ease her nerves and after that she calmed down enough to introduce the cast of the film on stage.
With the introductions done, it was time to watch The Wedding Party.

What follows is my review of the film.

The story of the Wedding Party is summed up in its name. Every Nigerian who has attended a Nigerian wedding knew what to expect from this film; but the creators of this film took this very ordinary story and made gold with it. Primarily, the casting was stellar.
Kemi Adetiba gave a voice to women and The Wedding Party heralded women, showcased their brilliance, and told the world that Nigerian women were more than the tiny box we’re constricted to.
Sola Sobowale – veteran Yoruba actress nailed every scene she was in. The mother of the bride whose facial expressions and nuances, had everyone laughing. She was the quintessential Yoruba mother and Sola’s artistry gave life to the lines by the script writer.

Iretiola Doyle – this woman’s skill and acumen can never be overstated. The mother of the groom, Iretiola played the part of that hurt wife, who hides her bleeding heart behind a stony façade.
Zainab Balogun – this woman is my girl crush. Seriously, I feel my fingers warbling over the keyboard, unable to articulate the thoughts I have about her. I did find her role a bit tenuous as the film started and I tired of the excessiveness and shrillness of the event planner. However, it made sense at the end. I still love you, Slaynab Bee!
Banky W & Adesua Etomi’s love seemed real enough and the kisses had me like *stones screen* *covers face*. There was one scene at the beach that was a little too cheesy and eye-roll worthy. I mean, who lit the fire on that beach for heaven’s sake? However, I’m a Grinch; please don’t take my word for it.

Frank Donga, Hafiz Oyetoro, Ali Baba and Emma OhMyGod! I can watch this movie over and over because of these four men. Richard Mofe-Damijo brought the sexiness of a hot man in his fifties to the screen and we welcomed it. He deserves his own sentence, dammit! He is RMD!

This romantic comedy hit all the notes and there were no loose ends. For every smoking gun in the narrative, there was a corpse lying around. (No, I don’t mean this literally!)

The song choices for the scenes were also quite apt. A good mix of contemporary pop culture and indigenous music, every song blended well with the accompanying scene.
I found the movie extremely entertaining and I laughed a lot. The writers laid on the cheese, but not so much as to make the viewer gag. The cinematography was also on point, and the shots were almost flawless – except for the part where the original groomsman was in the hospital. There was something weird about the way the guy was talking into the phone and the guys on the other side of the phone looked like they were receiving a FaceTime call. Then, there was the fact that his crotch was plastered? Come on, guys?!

Overall, this movie was AMAZING! And there were way too many people in the hall who were home sick and just needed the Naija experience. The Wedding Party was Kemi Adetiba’s way of inviting all of us into a group hug.
We leaned in, and went home smiling.

***
No payments in cash, or promise of favours, have been received in exchange for the ‘Atoke at TIFF16’ stories. The views expressed in the stories reflect the writer’s personal take from the events she attended at the festival – and not the opinion of a film critic.

In the spirit of TIFF and celebrating Nigeria and our amazing creativity, I’m giving away two tickets to one lucky person to go see Niyi Akinmolayan’s film, The Arbitration on Tuesday, September 13 – at 8.15PM. This giveaway is open to only those who are in Toronto and are able to go see the movie.

What to do? Follow me on Twitter and tweet at me with the funniest line you’ve heard in a Nigerian movie + the name of the writer of the script/director. The winner will be chosen by 10PM EST on Sunday the 12th of September.