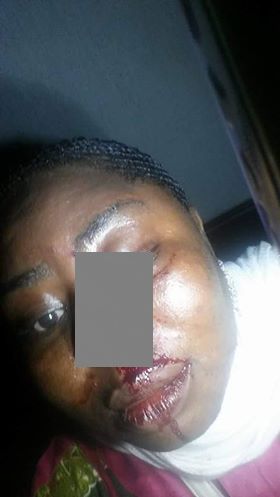 A man has been declared wanted by the police after he allegedly battered his wife’s niece at their house on Ile Eye Street, Solebo, in the Ikorodu area of Lagos State, PUNCH reports.

The suspect, Rasak Alabi a.k.a Alfa, allegedly hit the victim, Latifat Adeyemi, 27, with a spanner in the face and flogged her with a piece of cable.

Latifat said she has been living in the bungalow at the back of the house with her grandmother for the past 10 years.

The house was reportedly built by Alabi’s wife.

Alabi allegedly inflicted the injury on the victim for turning on the air conditioner in their apartment, saying that it consumed excessive power.

The reported stated that Alabi and his wife, who is a nurse based in the United States, separated about 20 years ago, but only reconciled in 2015. Alabi moved into the house thereafter.

“My aunt is a nurse and she is based in the US. She put her mother in the house and asked me to cater to her. Grandma and I had been living in that house for over 10 years.

Alfa (Alabi) and my aunt separated over 20 years ago. They never had a child together. But last year, they reconciled and the family said we needed a man in the house; so he moved into the house. He evicted our last born, but I stayed behind because of grandma.

Last week Friday, when I returned from Surulere around 7PM, I saw that he had broken into my apartment and removed the AC there. He said the AC consumed too much power.

I made a call to my uncle and I told him that I would be packing out of the house because I was fed up. As I turned around, he hit me in the eye several times with a spanner, and as I ran off, he picked a cable piece and flogged me,” Latifat said, narrating the incident.

She said that she reported the matter at the Ipakodo Police Station, but officers met the gate locked when they followed her to the house.

Latifat said the police turned back when they could not gain entrance.

Latifat’s step sister, Rasheedat, said that the AC issue was only an excuse the suspect used to chase the victim out of the house, following several disagreements between the duo.

“This is the only girl left in that house because of grandma. He had been finding excuses to send her away,” Rasheedat said.

Rasheeedat added that following the incident, the suspect reported to a vigilante group, Onyabo, that Latifat had mobilised her siblings to vandalise his car.

She also alleged that he went to  the Igbogbo Police Station to make other accusations.

Raheedat said the police called for a peace meeting between the parties, but the suspect rejected the move and ejected the grandma from the house.

“The old woman, who had left her husband’s house for the past 30 years, had returned to the same place again,” she said.

Te Lagos Police Command’s Spokesperson, SP Dolapo Badmos, who confirmed the incident said that “the suspect is evading arrest, but we will get him.”

PUNCH reports that Alabi did not pick calls to his phone and is yet to respond to a text message sent to his phone on Saturday.