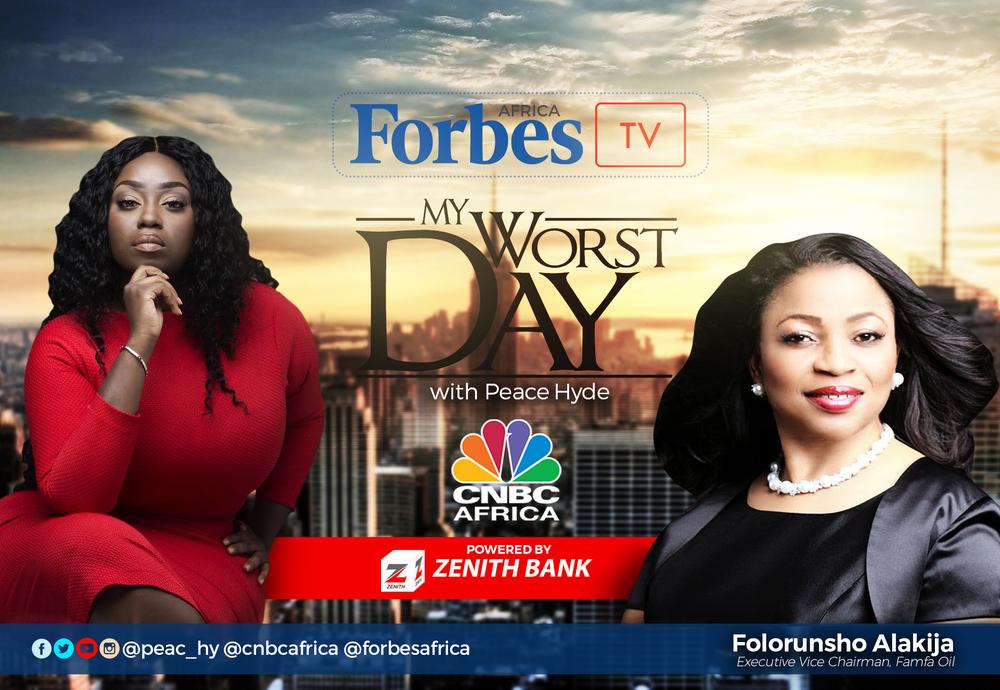 They say experience is the best teacher and in business experience can mean the difference between avoiding a lifetime of mistakes or landing in hot waters. This month, the Forbes Africa TV team brings one of Africa’s success stories Folorunsho Alakija as she shares on her most challenging day in business with Peace Hyde and these are 15 things we learnt from her story.

1. There are no overnight success stories:
It took Alakija just over 30 years to become one of the most influential women on this continent which goes to show that it takes time to achieve success.

2. Take control of your own career!
When Alakija realised that the company she was working with were hiring more people and it would take much longer for her to move up in the organization due to clogs in the system, she decided to quit and move on to a better position. Things only happen when you take control.

3. It Pays to invest in your growth
Sometimes to get to the next level, one has to spend time investing in ones personal development. After quitting her job, Alakija decided to study fashion to learn the trade and get qualified as a designer before becoming one of the leading fashion houses of her time.

4. You need to break out to break even!
Alakija won a fashion competition, which was the beginning of her breakthrough for her fashion label. That competition gave her national recognition and helped her to attract more customers.

5. Be vigilant, you never know when an opportunity is around the corner.
A chance meeting with an old friend on a flight to the UK was all Alakija needed to start thinking about the oil sector which now accounts for her $1.82 billion fortune. Next time you are in a Buka hut, think consider who might be holding your next big break.

6. No is never good enough!
Alakija initially had a number of rejections when she was looking to break into the competitive industry but each time she did more homework and went right back. Her persistence beat the resistance of the then oil minister who eventually awarded her the oil license.

7. Partnership is Key
As a business owner you may not be able to do everything on your own. Your ability to find the right type of partners to help you achieve your end goal will determine how effective you are as an organization. Alakija found technical partners before applying for her oil license giving her a much stronger chance of succeeding.

8. Time is an important factor of success
It took Alakija three years to get her oil licence and another three years to get a new set of technical partners to begin work. As an entrepreneur, your ability to succeed sometimes greatly depends on how resilient you are in waiting for your break through.

9. Sometimes a big break will look like a stumbling block
It is not all big breaks that look glamorous. Sometimes a break can be disguised as a barrier. When Alakija was awarded her oil block, it was one of the worst because it was deep offshore and there was no technology that had been developed to explore 5000 feet below sea level. But she still saw the opportunity and overcame the challenges.

10. Always expect the unexpected
After finally securing the oil block and finally reaping the rewards, Alakija had to now fight the government of the day who decided to back into their contract and take 40% of their 60% stake in the oil business. In business it is always prudent to prepare for the worst.

11. Know who your true friends are
When Alakija was in trouble with the government, they went knocking on several doors for help but nobody would help them. According to her, they suddenly became the plague with friends they had known for years all ignoring their phone calls.

12. When you have nothing to lose, choose to fight back.
Alakija and her family felt that they had everything to gain if they fought the government and won. At the time, everybody wrote the company off assuming the worst for the fledgling business. In the end, that risk paid off and they won.

13. You will not win every battle but you will win the war
Alakija’s battle with the government took 12 years and there were a lot of motions that were lost in court but at the end, her tenacity meant that they eventually came out as the victors in this battle.

14. Sign on the dotted line
Alakija had signed a contract with the government allowing them to back into the contract provided certain criteria were met. The government ignored the terms of the contract, which made their acquisition of the oil block void. In business, always have terms agreed and documented to avoid discrepancies.

15. Business has no Gender
Success in business is not the exclusive preserve of any gender but rather hard work and perseverance. Folorunsho Alakija is the only prominent female tycoon in the competitive male dominated oil industry proving that you can achieve anything you put your mind to.

“I believe a lot of things were shrouded in secrecy, I am not convinced” Governor Ayo Fayose on the Chibok Girls Return, Judges Arrest, Herdsmen and More