Imo State Govt. Abandons Huge Refuse Dump on The Road to "get back at Owerri people who have been battling the state government over the relocation of the market" 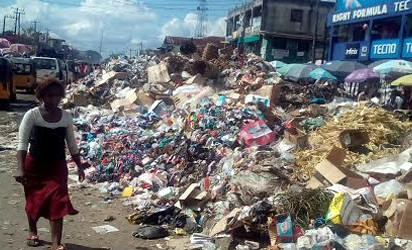 The Imo State Government on Thursday said that it deliberately abandoned the mountain of smelly refuse along the ever busy Douglas Road, Owerri, to get back at the indigenes who have been fighting the administration over the relocation of a market, Vanguard reports.

“Government deliberately abandoned the refuse along Douglas Road, Owerri, to get back at Owerri people who have been battling the state government over the relocation of the market.

Owerri people must be made to understand that they cannot eat their cake and have it.

There is a court order restraining government from tampering with the market and this also explains why we left the refuse,” he said.

One of the callers on the programme said that the government’s act is “a damnable plot to inflict hardship and disease on the people and not to respect a court order.”

Another called, identified as Amaze said:

“From what the Governor’s Press Secretary has said, it is now very clear that the palpable hatred which Owerri people have been complaining about is real. The Governor must hate Owerri so much to allow this level of devastation and dirt in the city.”