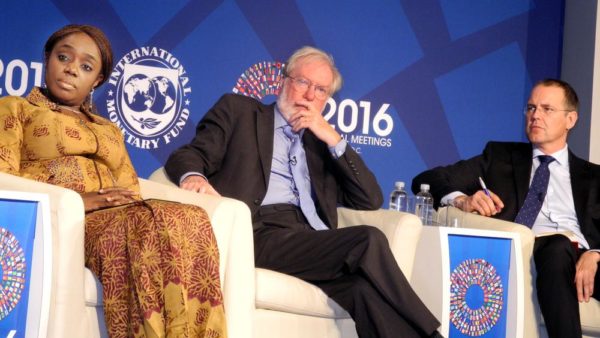 The Minister of Finance, Kemi Adeosun, speaking on Wednesday night at a session during the International Monetary Fund (IMF)/World Bank annual meetings in Washington D.C., told multilateral donor institutions and investors that Nigeria is hungry for infrastructure that can trigger growth, not iPhones and pricey suits that will drive consumption.

According to THISDAY, Adeosun made the remarks after the IMF announced that it would offer zero interest rate on its concessional lending facility from 2016 to 2018 to Nigeria and other low-income economies that are in dire need of financial support to boost their economies.

“It seems very simple, in terms of what needs to be done. We are quite excited about negative interest rates. We like that you’re not earning any money.

We are happy to take your money and give you very small positive interest rate. We think that the time has come, everyone is thinking out of the West, but there is nothing left in the West, everybody has to now come to Africa.

But we don’t want investors to come to Africa to sell us iPhones and many expensive suits. We want to become productive, so we want this investment to come into infrastructure that will enable us to compete and really enable Africans to stay in Africa,” Adeosun was quoted as saying.

According to the minister, Nigeria has begun a journey that will take its economy from being oil dependent to a more productive one

“From the numbers that we have done, the infrastructure gap that we face, even if we devote our budget for the next three years, it is not enough, so we’ve got to look for creative ways to mobilise additional capital.

We started of course with spending our own money (pension funds) because we think, of course, that the first thing we have to do is to re-establish some benchmarks, some ability to deliver on roads, on rails, on basic infrastructure.

We think the narrative around who pays for infrastructure is a very important one in Africa. I say that because at the moment, if you don’t have infrastructure, you are going to pay anyway. If you spend six hours on a journey that should take you an hour, you’ve paid.

So how do we convert that payment, which is currently informal and very painful, into a formal payment and therefore turn to a revenue stream that could attract investors, That is the challenge that we are working on now.

As I have said, we are leading with our own money. We are looking at a regulatory framework that would enable investors to come in. We know it’s a new market and we are going to de-risk it.

So what we are starting with are just infrastructure bonds that we guarantee, and then hopefully, when investors get an appetite for what the Nigerian infrastructure framework can provide them in terms of returns, we believe, we’d be able to remove some of the safeguards needed at the moment.

Our population is young; we have to provide a standard of living that keeps young vibrant Africans in Africa, because we think that is very important for eliminating poverty,” Adeosun added.

Imo State Govt. Abandons Huge Refuse Dump on The Road to “get back at Owerri people who have been battling the state government over the relocation of the market”