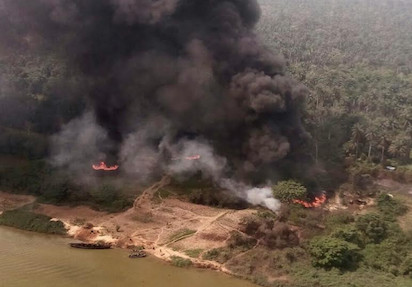 “In its concerted effort to stop illegal bunkering and criminal activities in the Niger Delta, the Nigerian Air Force, NAF, on Sunday destroyed illegal oil refineries and barges laden with petroleum products.

The refineries and barges were sighted by NAF Diamond 42 aircraft on Intelligence, Surveillance and Reconnaissance, ISR, mission in Bille community of Rivers State. Thereafter, one Mi-24V helicopter gunship was called in for the attack.

The operation was a success. A similar operation was carried out with remarkable success two days ago in the same location. These are clear signals to criminals operating in the South-South region, as well as other parts of the country, that it is no longer business as usual,” Famuyiwa said.